When Stephen Colbert took over for David Letterman on CBS’ “The Late Show” he got off to a surprisingly slow start. Audiences may have had trouble distinguishing the “real” Colbert from the character who hosted Comedy Central’s “Colbert Report.” Stephen may have had some trouble with that as well. 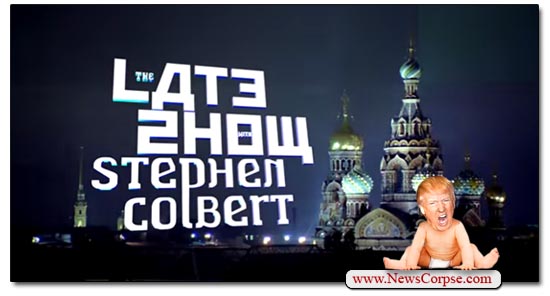 However, a few months ago, Colbert hit his stride as he took more direct aim at politics generally, and Donald Trump in particular. The writing got sharper and funnier. Colbert was more confident and seemed to be more comfortable in his own skin. And as a reward for taking a bigger bite out of the ludicrous state of the nation, the show quickly rose to the top of the ratings hill. For the first time in years the “Tonight Show,” now starring Jimmy Fallon, was knocked from its perch.

Last week Colbert aired a special series of programs with segments taped during his recent trip to Russia. Among his adventures were an interview of a Russian oligarch and a night in the infamous “pee pee” room. He also guested on a Russian talk show where he announced that he’s considering a run for president in 2020. The obvious dig at the ongoing scandals involving the unsavory connections to Russia by Trump and his associates paid off bigly for Colbert. He scored his highest rated week since the program’s debut in 2015. According to the Hollywood Reporter:

“Stephen Colbert got a lot of love for his ‘Russia Week.’ The CBS late-night host, who documented his trip to St. Petersburg and Moscow, rolled out the segments for another big ratings win.

“For the week of July 17-21, Colbert’s The Late Show averaged nearly 2.9 million viewers before any DVR lifts. Not only is that a 14 percent jump from the same week during the prior year, but it also marks his widest margin of victory over NBC’s The Tonight Show Starring Jimmy Fallon since Colbert’s CBS premiere week nearly two years ago. The Late Show outperformed Tonight by nearly half a million viewers.”

And there’s more good news for Colbert in addition to the Nielsen victory. The National Academy of Television Arts and Sciences released the list of Emmy nominees for 2017 on Tuesday. The Late Show was nominated for “Best Variety Talk Series.” The program also received nominations for directing and writing, for a total of five Emmy nods for the show. And if that weren’t enough, Colbert will be hosting the Emmy Awards broadcast on Sunday, Sept. 17, on CBS.

There is an important lesson to be learned from Colbert’s success. America is bitterly disappointed with the ignorant, lying, bully occupying the White House. They are embarrassed by his infantile antics and blatant crimes. All the polls bear out this view of Trump as the most unpopular president in modern times. And his policies are as out of favor as he is.

Last May Trump made the mistake of taking a couple of swings at Colbert. He called Colbert a “no-talent guy” and said there was “nothing funny” about him. But Trump never never mentioned him again after Colbert’s devastating on-air response. That’s just one of the ways that Colbert is the beneficiary of Trump’s arrogance and fragile ego.

Colbert’s success proves that Americans are hungry for relief from the constant shame that Trump imposes on the country. And until such time as that relief comes in the form of his leaving office, they are clinging to some comic relief to get them through the day. Every rating point and award for Colbert is a vote against Trump, and you can bet it’s gnawing at him. Hopefully he will tweet about it and give Colbert some more material that’s ripe for hilarious mockery.