It is absolutely impossible to call the bottom of Donald Trump’s abhorrent character, or lack thereof. Just when you think he’s in the deepest sewer, he confounds everyone by finding a gutter that’s dug even lower. Case in point, the controversy over his insensitive remarks to Myeshia Johnson, the widow of slain Sgt. La David Johnson. 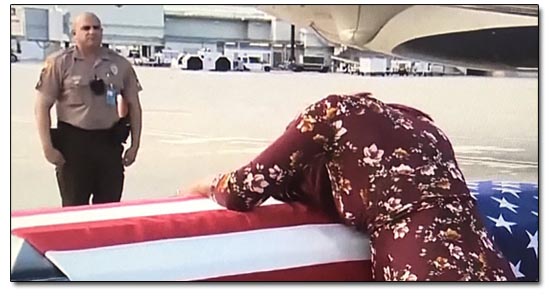 This affair began after Trump was harshly criticized for ignoring the deaths of four American Green Berets for two weeks. He had plenty of time to play golf and tweet about his media foes, but performing this traditional presidential duty was too much for him. When a reporter finally asked him to explain, he made some pathetic and plainly dishonest excuses. And true to form, he attempted to shift the blame and redirect the subject to others, notably President Obama.

Stung by the criticism, Trump condescended to do his job and finally called the families of the fallen. But even in performing this task he failed miserably. According to Rep. Frederika Wilson, Trump upset Ms. Johnson by telling her that her husband “knew what he signed up for.” Not surprisingly, Trump denied that he ever said any such thing. But to make matters worse, he made an implicit threat that he had “proof” that he would make public if needed.

Democrat Congresswoman totally fabricated what I said to the wife of a soldier who died in action (and I have proof). Sad!

There’s two problems with that:

ONE: It is horribly insensitive to make such threats to grieving families. Trump is challenging the veracity of Rep. Wilson, as well as Ms. Johnson and her mother, who all affirm his callous remarks. Rep. Wilson reiterated her account after Trump issued his threat.

TWO: It may have violated Florida law. The state has a statute that expressly forbids the kind of recordings that Trump is suggesting:

“Florida’s wiretapping law is a ‘two-party consent’ law. Florida makes it a crime to intercept or record a ‘wire, oral, or electronic communication” in Florida, unless all parties to the communication consent.'”

A few months ago Trump made a similar threat directed at former FBI Director, James Comey. He warned Comey that he “better hope that there are no ‘tapes’ of our conversations.” Six months later no tapes have emerged.

Trump’s belligerent yowling turned out to be more of the phony blathering that bullies resort to. But this time it was aimed at a grieving widow. And in the unlikely case that any tapes exists, they are evidence his criminality. Plus, with all of the witnesses supporting Rep. Wilson’s account, any tapes are only likely to prove that he’s a repulsive liar.

UPDATE: At today’s press briefing, press secretary Sarah Huckabee Sanders declined to refute that Trump made the statement about “knowing what he signed up for.” In other words, he did say it. Also, she said that there were no tape recordings of the conversation. Trump’s alleged proof was witnesses to his phone call. In other words, no proof.

4 thoughts on “Trump threatens congresswoman and fallen soldier’s family. And may have broken the law.”