The catalog of lies accumulated by Donald Trump has broken all records. The Washington Post has compiled more than 1,100 just since his inauguration. No one who values honest discourse can pretend that this president engages in it. It’s an embarrassment and a stain on America’s reputation that may take decades to erase. 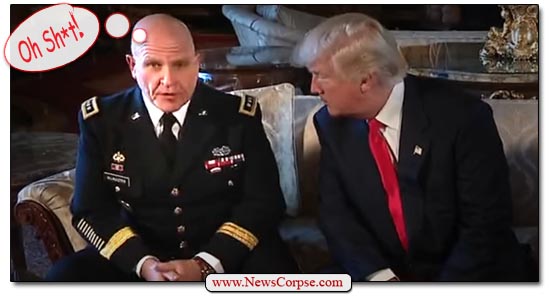 Perhaps the most repulsive lies are those that touch on the tragic fatalities of American soldiers. So naturally that’s precisely the course Trump took on Monday in an impromptu press conference (video below). He intended to address the media following a meeting with Republican Senate Leader Mitch McConnell. And he began by lying about what a tremendous relationship they have. But Trump was later asked about why, after twelve days, he had not bothered to make any public comment about four Green Berets who died in an ambush in Niger. His rambling, nearly incoherent response was filled with falsehoods:

“I’ve written them personal letters,” he began. “They’ve been sent, or will be going out tonight.” Less than a minute later he contradicted himself, saying the letters would be going out “either today or tomorrow.” Then, while pontificating about how “tough” it is for him, he said that he still plans to call the parents of the deceased:

First of all, You have to wonder what makes him “able” to make these calls. He has been golfing at his luxury resorts five times since the soldiers were killed. So obviously that cut into whatever time he had for this presidential duty. But more importantly, his assertion that other presidents didn’t make such calls was a blatant lie. Every president in modern history has done so.

Trump’s remarks are disrespectful to both the former presidents and the Gold Star families who expect honest and sincere sympathies. A few minutes later, Peter Alexander of NBC News pressed Trump on his statement:

Alexander: “Earlier you said that President Obama never called the families of fallen soldiers. How can you make that claim?
Trump: I don’t know if he did. No, no, no. I was told that he didn’t often, and a lot of presidents don’t. They write letters. I do a combination of both. Sometimes it’s a very difficult thing to do, but I do a combination of both. President Obama, I think probably did sometimes. And maybe sometimes he didn’t. I don’t know. That’s what I was told. All I can do is ask my generals.”

WTF was that? Trump started to walk back his original lie. But then he tap danced back to it to say that Obama didn’t call, or did, or didn’t. Or who knows? And it’s just so darn difficult for him. Finally, Trump laid the blame on the generals who are advising him. So if there is anything wrong in what he says, it’s their fault. Remember, these are the generals that he said he knows more than.

The take away from this press conference is that Trump doesn’t know whether or not other presidents have called Gold Star families. Also, that he thinks his generals are feeding him lies. And he never gave an answer as to why it took him twelve days to acknowledge the sacrifice of these soldiers. But none of that will stop this five-time draft-dodger from exploiting the military tomorrow for a photo-op. And then declaring himself the biggest supporter they have ever known. Believe me.

5 thoughts on “Watch Trump say that Obama never called Gold Star families, then blame his generals for that lie”