Rarely have I seen such a desperate attempt to evade reality as has occurred since the shooting rampage in Tuscon. It would seem to be a fairly non-controversial notion that when a politician is targeted for assassination, the language that contributes to hostile discord ought to be carefully considered and avoided. The last thing anyone should want is another Jared Loughner. However, just raising that issue has caused politicians and pundits on the right to stiffen their backs and go on offense. They are taking such talk very personally. Could it be because they are harboring a latent guilt?

While the left has been responding to an horrific act of violence with calls to tone down the rhetoric, many on the right have assumed an attack posture. Keith Olbermann delivered a commentary yesterday wherein he included himself amongst those who have crossed the line. He apologized. There has been scarce reciprocation on the right. In fact, they have dug in their heels to assert that they will continue as if nothing has happened. Sarah Palin’s camp even contends that their notorious “Hit List” didn’t represent a gunsight’s crosshairs, but those on map. That might have been a little more plausible if Palin herself hadn’t referred to it as a bullseye.

So it should come as no surprise that Fox News would employ their propaganda web site, Fox Nation, to muddy the waters and absolve the right of any wrongdoing while tarnishing the left for observing the obvious. The Fox Nation presently has eleven articles that place the left in a bad light and/or polish the right’s reputation. Methinks they doth protest too much. 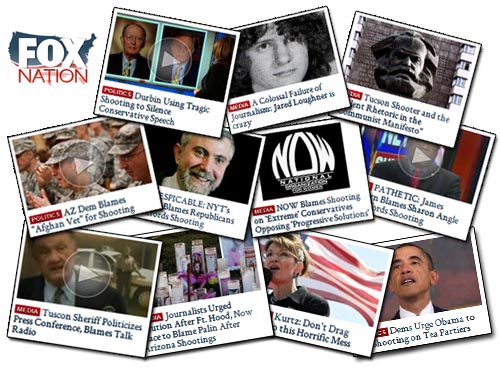 And it doesn’t stop there. On Andrew Breitbart’s BigGovernment, Jim Hoft, one of the most ignorant writers on a web site heralded for its ignorance, makes the ludicrous claim that “Democrats Plotted to Blame Tea Party for Slaughter.” Hoft’s justification for this “breaking” news flash was this paragraph from an article on Politico:

“One veteran Democratic operative, who blames overheated rhetoric for the shooting, said President Barack Obama should carefully but forcefully do what his predecessor did. ‘They need to deftly pin this on the tea partiers.'”

Did I mention that Hoft was ignorant? He is inferring from a single, anonymous source that a “plot” was in progress. And his inference is based on an opinion, not a plan. The source is suggesting what he thinks Obama ought to do, not what Obama, or any other Democrat, is actually doing. So there is no plot, just one guy with an opinion. And if this “operative” actually had access to the White House, or any group that could carry out this alleged plot, he would have given this advice to the President instead of a reporter from Politico.

What Hoft left out was the part where Politico reported this analysis from a senior Republican senator:

“There is a need for some reflection here – what is too far now?” said the senator. “What was too far when Oklahoma City happened is accepted now. There’s been a desensitizing. These town halls and cable TV and talk radio, everybody’s trying to outdo each other.”

The vast majority of tea party activists, this senator said, ought not be impugned.

“They’re talking about things most mainstream Americans are talking about, like spending and debt,” the Republican said, before adding that politicians of all stripes need to emphasize in the coming days that “tone matters.”

“And the Republican Party in particular needs to reinforce that,” the senator said.

I wonder why Hoft didn’t accuse this GOP senator of engaging in a plot to tone down the rhetoric as advised by most of the left. However, he did make the flat assertion that Loughner was “hardly a tea partier.” Apparently Hoft was unfamiliar with Loughner’s anti-government views, his opposition to immigrants and immigration reform, his advocacy of guns, and his opposition to the “2nd Constitution,” a rightist theme that regards the 14th Amendment’s securing of equality and birthright citizenship as unconstitutional. These are all views consistent with the Tea Party.

The truth is that the right is the only side that could plausibly be characterized as plotting anything. Hoft’s own column for Breitbart is evidence of that. And did the Fox Nationalists really need eleven articles to push their narrative? Then there is Judson Phillips, founder of the Tea Party Nation, who explicitly urged his followers blame liberals for the attack on Rep. Giffords. He wrote to his followers that…

“The hard left is going to try and silence the Tea Party movement by blaming us for this. […] The left is coming and will hit us hard on this. We need to push back harder with the simple truth. The shooter was a liberal lunatic. Emphasis on both words.”

The right is on a mission to wash their hands of any accountability for violence that is all too predictable. It would be much easier if they were to take the position of the GOP senator above who understands that this is the time to be thoughtful about what we say and the impact it may have on the mentally wobbly. Unfortunately, that is not the path the right is headed down.

It has been over 32 hours since the shooting in Tuscon and Glenn Beck, arguably the worst offender at being offensive, has not made a single public statement. There is nothing on his web site – no tweets – not even an expression of condolences. And you can rest assured that he will return to the air Monday with a delusional conspiracy theory for what he thinks happened in that Safeway parking lot. I can hear it now…..

Beck: Over the weekend there was a horrible crime committed against a United States Congresswoman. She is still clinging to life, but a judge, a young girl, and several others were killed.

Now, if you were watching the liberal media you may have come away thinking that this was the work of a conservative or a Tea Party member. I can assure you that nothing could be further from the truth.

Here’s the truth. Here’s what only I have been able to uncover through dogged research. Here’s what the media is afraid to tell you. Rep. Giffords was killed in order to silence me and other conservative broadcasters. That’s right. This was a liberal plot to create an environment where people would be calling for harsh rhetoric to be stopped.

Top down, bottom up, and inside out. The progressives are thinking all the time about how to stifle our message, and they know that by making a martyr of Rep. Giffords they can demand that we shut our mouths and crawl off into a corner. They can accuse us of inciting people to violence. And they think that will cause us to keep quiet about their plans to destroy America and demolish our moral culture. That’s why they sent their mole, Loughner, to the supermarket on Saturday. Some of my voices…I mean sources…are telling me that Loughner was seen with Van Jones and Cass Sunstein going over plans to take over the media.

But we aren’t going to let that happen, are we? We will remain strong because we know that only by eliminating our enemies can we live in peace.

Now, remember, I don’t want anyone to engage in violence. Even though the progressives are determined to see your future, and that of your children, blown apart and ruined for all eternity, you must not react violently. That’s what they want you to do. So even though they are going to put an end to the American Dream and cause our society and our economy to break down so badly that we will be praying for death rather than live in the socialist hell they want to create, do not become violent. Got it. Just get ready to suffer and prepare your kids for suffering like they have never known. Watching the whole world sink into depression and slavery is certainly no reason to resort to violence, is it? Well, is it? If you believe, like I do, that America is exceptional and worth preserving, then you know what to do.

And by the way, be sure to pick up a copy of my new book, “Reading Between the Lies.”

You read it here first.

[Update] Beck lived up to my speculation. On his Monday Fox News program he said:

“The solution, in this case, is to silence the opposition […] shut down the right […] How do you shut them down? You say it’s hate speech.”

As I suspected, Beck exploited the massacre to whine about the tragedy as a conspiracy to silence him and his rightist comrades.

[Update II] The right is now openly defending hate speech. Jack Shafer, editor at large of Slate.com, posted an article titled: In Defense of Inflamed Rhetoric
The awesome stupidity of the calls to tamp down political speech in the wake of the Giffords shooting.

Shafer’s article is really a demonstration of his own awesome stupidity. He argues that there haven’t been enough episodes of violence to justify the criticism of incendiary language. He is ignoring the numerous examples – from Dr. Tiller to Byron Williams to the Holocaust Museum to the Marine recruiting station to the gas line tampering at a congressman’s home. How many examples does Shafer need before he becomes concerned? But the real stupidity in his column is this passage:

“Any call to cool “inflammatory” speech is a call to police all speech, and I can’t think of anybody in government, politics, business, or the press that I would trust with that power.”

Nobody – repeat NOBODY – has suggested that inflammatory speech be criminalized. This is an invention of Shafer’s twitchy imagination. The matter is in the hands of the speakers, politicians and pundits, to be responsible and/or accountable. Free speech is not a shield from criticism of what is said. It extends to the critics as well. And when Shafer says that “violent imagery is a good thing” he illustrates just how idiotic and counterproductive right-wing hate mongers (like himself) can be.

3 thoughts on “Hostile Intent: Right-Wing Media Doth Protest Too Much”