Today most Americans are gathering in their homes and preparing to feast on traditional Thanksgiving fare while avoiding irritating arguments with crazy uncles who watch too much Fox News. It’s a day that is often commemorated by presidents and other politicians with heartfelt remarks to the nation expressing what we all have to be thankful for. Previous Commanders-in-Chief (Bush, Obama, etc) actually traveled to bases in war zones to personally thank soldiers for their sacrifice. And when they didn’t do that they volunteered at aid centers for the homeless. They at least made an effort to display some compassion and empathy for those of us undergoing sacrifice or hardship. 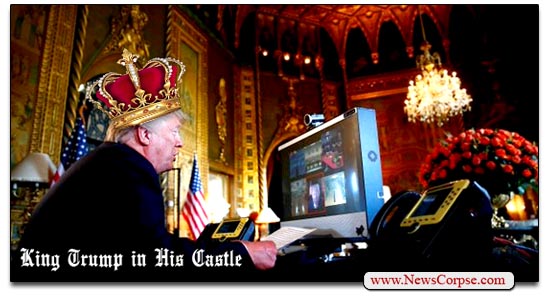 And then there is Donald Trump. Too preoccupied with his own comforts, he spent the holiday in the opulence of his luxurious Mar-a-Lago golf resort in Palm Beach, Florida. He has now spent 100 days of his 307 days since inauguration in one of his branded properties. That’s a third of his presidency away from the White House where taxpayers foot the bill for his selfishness and aversion to work. And he couldn’t be bothered to express genuine thoughts of the day, so he read a prepared speech to soldiers stationed in Afghanistan.

Trump’s speech (video below) was a typically embarrassing paean to himself. Disguised as an expression of gratitude for the troops, he made certain that all of the real praise was for his own imaginary greatness. For example (emphasis added):

“Everybody’s talking about the progress you’ve made in the last few months since I opened it up. We opened it up, we said go ahead, we’re going to fight to win. We’re not fighting anymore to just walk around, we’re fighting to win.”

“The fight against ISIS, it’s coming our way. Coming our way. Big, big difference. A lot of things have happened. They say we’ve made more progress against ISIS than they did in years of the previous administration. That’s because I’m letting you do your job.“

In addition to the obvious and repugnant exaltation of himself, Trump also managed to insult everyone in the military prior to his election who were fighting and dying and, by the way, winning. He truly believes that the only reason there has been any success in this endeavor is because of him. Never mind that he hasn’t done a damn thing to change the mission or the rules of engagement in the war theater.

And if that’s not enough, Trump exploits and trivializes this video visit with the troops to make blatantly political remarks that misrepresent his term in office. He delivers his robotically repeated boasts about the stock market and unemployment rates that he’s had absolutely nothing to do with. Then he makes a pitch for his tax reform bill that gives corporations and the wealthy huge tax cuts and raises taxes on everyone else. And then he informs the troops that that is what they are fighting for.

How inspiring. Our soldiers must be so proud to know that they are defending the profits of wealthy robber barons whose sons and daughters will never see a battlefield or make such sacrifices. And as they continue to put their lives on the line, Trump will continue to take credit for their achievements and insult them and their peers who served under previous administrations. All of that must make this the happiest Thanksgiving ever – for Donald Trump.