It’s no secret that Fox News is the official PR division of Donald Trump’s administration. They relentlessly defend the President from any and all criticism and attack his political opponents in the most vile and dishonest terms. Fox News is worse than state-run TV. They are fully involved co-conspirators to the criminal enterprise operating out of the White House. 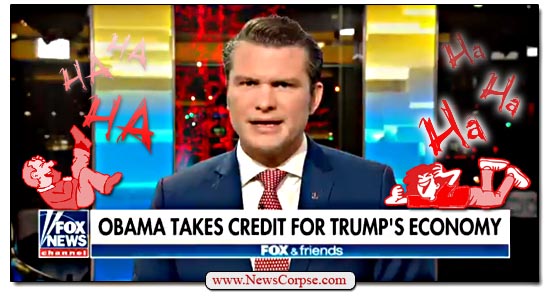 Another example of just how far Fox News will go to fluff Trump occurred on his favorite TV show, Fox and Friends. This episode featured a feverishly biased “economist” who managed to get through an entire interview without citing a single economic fact. The segment began with co-host Pete Hegseth introducing a thoroughly false premise (video below):

Hegseth’s opening was hardly fair and balanced (a slogan that Fox doesn’t use anymore). Besides cherry-picking data regarding the state of the economy, he states as a matter of fact that credit is being stolen from Trump. And the thief is, predictably, an unemployed black man. Then he plays a clip of President Obama:

“As we took these actions we saw the U.S. economy grow consistently. We saw the longest streak of job creation in American history, by far. A streak that still continues, by the way. Thanks Obama.”

Upon completion of the clip Hegseth abandons any editorial independence and asks “Shouldn’t we be thanking President Trump?” That question was thrown to University of Maryland Professor Peter Morici, who unhesitatingly agrees with Hegseth that Trump deserves all the credit for the current state of the economy. His scholarly justification for that assessment is that:

“President Obama reads from a very simple textbook of economics. All the problems in the world are caused by Republicans and when Republicans are in they cause nothing but problems.”

What’s missing from that economic analysis is anything remotely related to economics. It’s a brazenly political insult that completely avoids any factual basis. In other words, Morici has done his job as a Fox News analyst perfectly. Never get bogged down with facts when smear tactics are available.

Morici went on to concede that “during the Obama administration they created jobs, for sure,” but then he falsely asserted that it was at a slow pace. He compared Obama’s record to that of Ronald Reagan. Which makes you wonder why he didn’t bother to compare it to Trump’s. Perhaps because in the past ten months of Trump’s presidency job growth has significantly slowed. In fact, it has been the slowest ten months in over five years.

Hegseth interrupted Morici to provide additional ammunition for the argument that Trump is the savior of the American economy. He cited the thirty percent growth of the stack market (but left out that it more than doubled during the Obama years). He noted that GDP had grown in a couple of quarters by three precent (which also happened during Obama’s administration). And he praised Trump for the 4.1 percent unemployment rate (a figure that was an extension of Obama’s jobs policies).

What both Hegseth and Morici ignored is that there isn’t any Trump economy. He has done literally nothing that might have impacted any economic metrics. There has been no legislation passed relating to jobs, budget, debt, or anything else economy related. Consequently, the nation is still running on the programs put in place during Obama’s administration. The only thing that Republicans can cite as evidence of their impact is a vague claim to a “mood” in the country that has allegedly advanced the economy. So their whole argument is based on a feeling. How cute.

Morici’s closing argument was rooted firmly in typical “trickle-down” economics that have been proven repeatedly to be a right-wing hoax. And he had the gall to assert that after eight years of record growth, a continuation of the Obama plan would reduce America’s economy to that of North Korea’s. Of course, he never bothered to substantiate that bit of ultra-nonsense. And then he rattled of some of the Trumpian things he said help the economy, including tax cuts, infrastructure spending, immigration reform, and cutting entitlements. None of which have been implemented.

So in the end, Morici and Hegseth relied solely on emotional irrelevancies and their political biases to celebrate Trump’s successes that don’t exist. And somehow from that they conclude that Obama was the one stealing credit. But at least they can rest easily that their audience will believe whatever unfounded crap they dish out. That’s the benefit of having Fox News around to spread propaganda to the gullible yokels who are dumb enough to watch.

.@PMorici1: @realDonaldTrump is accomplishing something that @BarackObama just couldn't do. pic.twitter.com/RIJhlVCt7J

2 thoughts on “All Foxed Up: The Humiliating Attempt By Fox News to Credit Trump for Obama’s Economy”