It is unbelievable that it’s become so redundant and tedious to respond to yet another senseless massacre of children. But that’s where we are now in America. There have been eighteen school shootings so far this year, and it’s only February. And what have our “leaders” done about? Well Republicans have taken millions of dollars from the NRA and passed, with Donald Trump’s signature, a bill making it easier for the mentally ill to buy guns. 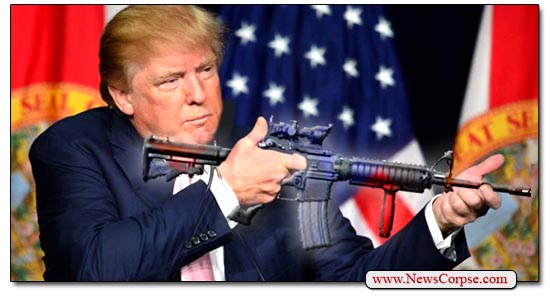 There are actually ways to prevent these killings, but they are being actively suppressed by right-wing politicians and organizations. They say that after heinous shootings it is “not the right time” to discuss taking deadly weapons of war out of the hands of dangerous miscreants. But apparently, it is always time to offer “thoughts and prayers” (which worked so well the last time?). The callousness of people who refuse to seek common sense solutions are escalating the body count. They insist that there is no gun problem in America, only mental health issues.

The risks imposed by psychological deviants are all too real. But there is more to the matter than that. These sick individuals are helped by arming them with ever more destructive methods of killing. But if conservatives, who love their guns more than they love their kids, aren’t willing to do anything about that, than let’s take a look at those who truly present a danger to our society.

The preindicators for mentally disturbed persons who could pose a risk of becoming the next mass murderer are well documented. And, frighteningly, they are all observable in our president, Donald Trump. We have been told by law enforcement authorities that when we “see something, say something.” So in the spirit of community service it is critical that we take note of these warning signs:

Allowing someone with these troubling psychological deviancies to remain in a position of power is asking for trouble. Trump tells us almost everyday that he is seething with animosity that could boil over into hostility. And the more he feels pressured and under attack, the more likely he is to explode into a tantrum of hatred and vengeance. That’s especially dangerous since he currently has the worst approval ratings of any president on record. Add to that the fact that is being investigated for serious and impeachable crimes. If ever there was someone who might be viewed as a threat to society, it is Donald Trump. And now that we’ve seen this, it would be irresponsible and potentially catastrophic not to do something about it. #Impeach #25thAmendment

4 thoughts on “Warning Signs: Is Donald Trump the Next Mass Murderer? (See Something, Say Something)”