Marjory Stoneman Douglas High School, the Parkland, Florida school, where fourteen kids and three adults were murdered by a maniac with an AR-15 assault weapon, has become a flash point in the debate for gun safety. That debate has been driven mainly by the student survivors themselves. Their passionate and articulate commitment to finally making change happen is one of the few signs of hope in the aftermath of yet another massacre. 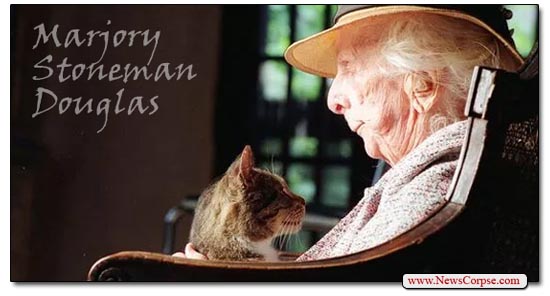 However, little has been reported about the namesake of the school, Marjory Stoneman Douglas. As it turns out, she was an inspiring woman who was a fierce advocate for speaking out on matters of importance. During a life of activism and personal sacrifice she was quoted as saying “You have to stand up for some things in this world.” She lived those words throughout her life and inspired others to do the same. In 1993 she received the Presidential Medal of Freedom from Bill Clinton. And while in the White House that day she was invited to witness the signing of the Brady Handgun Violence Prevention Act (the Brady Bill).

But that isn’t the only eerie coincidence about Douglas and the specific focus of her activism. According to a biography on the National Park Service website:

Marjory Stoneman Douglas, born April 7, 1890 in Minneapolis, Minnesota, graduated from Wellesley with straight A’s with the elected honor of “Class Orator.” That title proved to be prophetic.

In 1915, following a brief and calamitous marriage, she arrived in Miami, working for her father at the Miami Herald. She worked first as a society reporter, then as an editorial page columnist, and later established herself as a writer of note. Here she took on the fight for feminism, racial justice, and conservation long before these causes became popular.

So Douglas began her professional career as a journalist. Or as Donald Trump would say “an enemy of the American people.” She went on to champion women’s rights, something Trump has ridiculed and whose personal history of sexual harassment and assault demonstrates extreme disrespect and misogyny. Douglas was also a proponent of civil rights and racial justice. That contrasts with Trump’s overt bigotry and that of his base, which includes KKK and Nazi leaders and organizations. And finally, Douglas was best known for her environmental activism and her work to conserve the Florida Everglades. She wrote a landmark book on the subject titled, The Everglades: River of Grass.

Trump surely doesn’t know anything about Douglas or her lifelong dedication to service and social change. But if he did he would certainly despise her and attack her with a flurry of furious and derogatory tweets. He would insult her and make up stupid nicknames. And he would express his opposition to everything she stood for. All of this adds a rather somber poignancy to the tragedy in Parkland. But it may explain the stirring and righteous reaction from the students who probably do know Douglas and her work. They are likely inspired by quotes like this one: “I believe that life should be lived so vividly and so intensely that thoughts of another life, or of a longer life, are not necessary.”” And it may explain the heartrending intensity of their oratory as exemplified in this speech by student Emma Gonzalez:

5 thoughts on “Who Was Marjory Stoneman Douglas and Why Would Donald Trump Have Hated Her?”