If you were still uncertain as to whether the NRA is an organization steeped in partisan rancor and vile, hate-filled hysterics, the remarks by its chief spokesperson, Dana Loesch, at the Conservative Political Action Conference (CPAC), will put an end to your doubts. 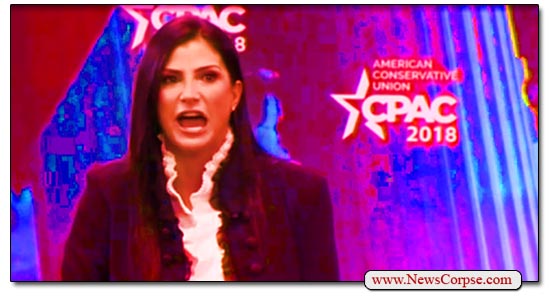 On Wednesday night Loesch appeared on the CNN Town Hall featuring student survivors from Marjory Stoneman Douglas High School along with some parents, teachers and politicians. Loesch attempted to present herself as a rational, open-minded participant in a discussion seeking to find solutions to a serious problem. But the very next day she let her true feelings come out in her speech at CPAC (video below):

It’s not surprising that she didn’t say this to the faces of the “crying white mothers” in CNN’s forum. She is a deceitful, manipulative hack who who will happily lie in order to achieve her ends and those of her benefactors in the firearms industry. To make the broad accusation that the media “loves mass shootings” in a public address demonstrates her utter lack of decency and humanity. And her ability to turn around in a few hours to display both ugly sides of her face is something that only comes with an innately grotesque personality.

But Loesch went even further to insult the parents of murdered children as if they were disingenuous contestants on a reality TV show. And the interjection of a racial component only makes the insult many times worse. Her CPAC performance was like watching a cartoon villain giving away all her secret, evil plans, secure in the belief that her opponents would soon be dead and unable to stop her. That may be why she also unleashed this bit of BS:

“The government has proven that they cannot keep you safe, and yet some people want all of us to disarm. And then they also call Trump a tyrant, but then say they want the president to also confiscate our firearms. Try to figure that one out.”

Of course, no one is proposing to disarm the entire nation. Likewise, no one has suggested confiscating all firearms. These are just the NRA’s standard lies to whip up fear among their followers that a tyrannical overlord is plotting to enslave America and only the NRA can prevent it. They screeched for eight years that President Obama was coming for their guns, never mind that it never happened, nor was there any threat of it. The NRA is fear machine and it has to have an enemy to survive. Preferably a dark-skinned one.

Loesch’s remarks were not a one-off or gaffe. It’s an NRA mantra as seen in this video from NRA-TV. The commentator uses the identical language that Loesch used about loving mass shootings, repeating it for emphasis. And he spent the rest of the time spewing the NRA line in a monologue of deceit.

That’s what the NRA does. It is their whole purpose for existing. They do not represent gun owners. They shill for gun manufacturers. Which is why they push for more guns as the solution to every problem. No matter what it is, the only NRA approved response is to buy more guns. They are about marketing and nothing else. And if innocent people die, that’s just the price of capitalism.