The Tuesday Morning Massacre at Donald Trump’s White House rocked the political media. In the matter of a few hours Trump had fired the Secretary of State Rex Tillerson, Steve Goldstein, the State Dept spokesman whose announcement of Tillerson’s firing contradicted the White House story, and Trump’s personal assistant, John McEntee, whose dismissal was due to an investigation for “serious financial crimes“ (He was then immediately hired by Trump’s 2020 campaign). 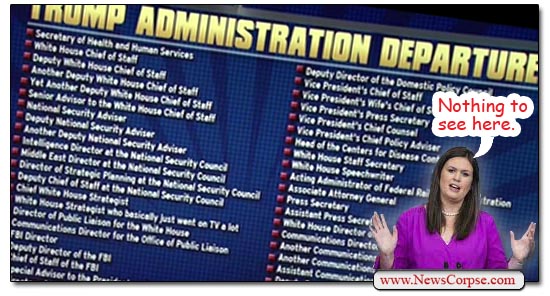 However, over on Fox News the presidential pandemonium was given a much more positive spin. It didn’t represent the turmoil that everyone else was seeing. It was merely, as Fox political editor Chris Stirewalt said, “Trump being Trump.” In an interview (video below) with anchor Sandra Smith, Stirewalt dutifully pardoned the President for any malfeasance in office or mismanagement.

Smith: “Does this add to the speculation of disarray inside the West Wing? Or should one just decide that this is the way the President works?”
Stirewalt: “Well, both things could be true. Disarray may be the methodology. If disarray is a methodology, then perhaps that is Trumpism. But let’s also remember if we put this in context of what else is going on, we saw Donald Trump govern in 2017 as a very traditional kind of Republican president. In 2018 we’re seeing Trump being Trump. […] And so I think we are seeing here, maybe not disarray, but instead this real pivot back to core nationalist, populist Trumpism.”

See? It’s just Trump executing his plan perfectly. It’s all unfolding exactly the way he wants it to. Nothing out of order, or out of the ordinary. He is just “pivoting” back to his “core nationalist, populist Trumpism,” whatever the hell that is.

If those remarks weren’t ludicrous enough, Stirewalt also had to assert that last year Trump was “very traditional.” In what dystopian nightmare? 2017 was a year filled with lying, hypocrisy, and a policy agenda that was either preposterous or dangerous or both. It was the year that he tried (and failed) to repeal ObamaCare. He rescinded DACA by executive action. He pushed through a tax bill that enriched corporations and his wealthy pals to the detriment of everyone else.

And his personnel management was a historical disaster. There was a forty-plus percent turnover in top presidential posts. And just to put a fine point on Trump’s deranged perspective, he had this to say regarding his recent staff shake-up: “I’m really at a point where I’m close to having the Cabinet, and other things, that I want.” He’s been in office for more than a year and he’s just now getting to that point? God help us all if he ever actually gets there.

But leave it to Fox News to sugar-coat Trump’s incompetence. And it didn’t take them an hour to develop this public relations propaganda spiel. Just think what they’ll be saying by this evening when Sean Hannity goes on the air. By then Trump will be heralded as the most brilliant national leader of the millennium. And sadly, way too many glassy-eyed Fox News disciples and Trump cultists will believe it.

Fox News' interpretation of Tillerson's ousting — This isn't a sign of disarray it's just the highly anticipated ?pivot?

Fox News' politics editor: "I think we are seeing here, maybe not disarray, but instead this real pivot back to core nationalist populist Trumpism." pic.twitter.com/qo2zEjfi5u