It’s been over a year since the election of Donald Trump and the media is still preoccupied with the hold Trump has on his glassy-eyed disciples. They keep convening panels of Trump voters to ask them why they voted for him and if they still support him. Curiously, they aren’t convening similar panels of Hillary Clinton voters. But the Trump voters continue to profess their undying devotion to the President. Never mind that he is being investigated by a special counsel for colluding with Russia to steal the election, or that his affairs and sexual assaults continue to be revealed. 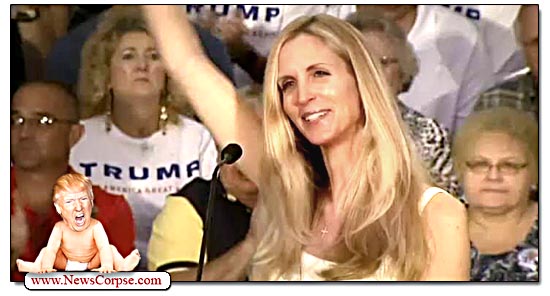 At least there is one Trump fan who is demonstrating a measure of honesty about her support. Ultra-rightist bigot and author Ann Coulter participated in a discussion at Columbia University Tuesday where she was challenged on her past advocacy of Trump. Her remarks were surprisingly candid and they cleared up a lot of what is puzzling about Trump’s appeal. She proudly proclaimed that:

“I knew he was a shallow, lazy ignoramus, and I didn’t care.”

So there you have it. The author of In Trump We Trust admits that she trusted “a shallow, lazy ignoramus” with running the richest, most powerful nation on the planet. The reason that Coulter doesn’t regret her support for Trump is that she always expected him to be just as idiotic as his critics said he was – just as blindingly stupid as he appeared to be. How can she be disappointed if she got precisely what she was expecting?

That’s not to say that Coulter wasn’t disappointed for other reasons. She was clearly upset that Trump didn’t deliver on his most frequently articulated campaign promise. “He’s not giving us what he promised at every single campaign stop,” she whined. And of course she’s referring to the border wall that would be paid for by Mexico. Coulter’s new found bitterness has nothing to do with Trump’s record breaking and pathological lying. She isn’t bothered by his mistreatment of women or the intimidation tactics he used to silence them. His raking in cash from foreign governments and lobbyists is apparently fine with Coulter. But not having surrounded America into a prison-like disclosure in order to keep out brown people is an unforgivable affront.

Despite her dissatisfaction with Trump’s inability to wall off our southern neighbors, Coulter is adamant that she made the right choice to vote for him in 2016. She told the Columbia audience of mostly college Republicans that:

“I regret nothing. I’d do the exact same thing. I’d write the exact same book, with the exact same title. We had 16 lunatics being chased by men with nets running for president – and Trump. So of course I had to be pedal-to-the-metal for Donald Trump. I’d been waiting 30 years for someone to say all these things. I went into this completely clear-eyed.”

The sixteen lunatics that Coulter was referring to were the cream of the GOP crop. They included nine governors and five senators. Two of these loonies (Ben Carson and Rick Perry) ended up in Trump’s cabinet, where they are notable primarily for screwing up and embarrassing the President – and the nation. And what Coulter must have been waiting thirty years for someone to say was that immigrants are rapists and drug dealers from shithole countries. Therefore, it’s understandable why and she the rest of the Deplorables have no regrets. Trump has proven himself to be the president they hoped for. Unfortunately, he’s also the one that the rest of America feared.

3 thoughts on “Ann Coulter Knew Trump Was ‘a Shallow, Lazy Ignoramus’ and is Still Proud of Voting For Him”