The list of men in powerful positions at Fox News who have engaged in acts of sexual harassment or assault continues to grow. Their legacy of deviants includes their former CEO and founder, the late Roger Ailes, their biggest star, Bill O’Reilly, host Eric Bolling, and Fox Sports President Jamie Horowitz, to name a few. Fox and Freinds co-anchor Ed Henry was suspended for several weeks for having an adulterous affair. And most recently it was discovered that the wife of host Jesse Watters filed for divorce due to his ongoing adulterous affair with a twenty-five year old co-worker 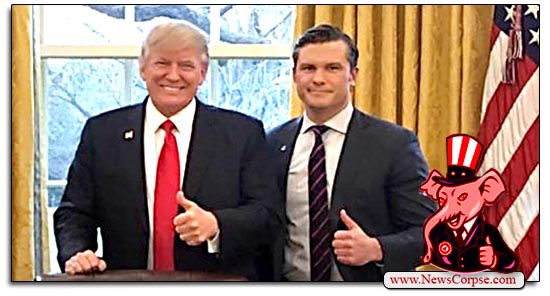 Now we can add Fox and Friends co-host Pete Hegseth to the list. This case of infidelity was also revealed in divorce papers for the sanctimonious and hypocritical family values advocate and favorite of serial sexual predator Donald Trump. APM Reports found that:

“Hegseth — a telegenic, Army veteran who served in Iraq and Afghanistan — is in the process of divorcing his second wife after having an extramarital affair and a child with a producer at Fox News. Hegseth’s second wife filed for divorce roughly a month after the girl was born. […] His first marriage also ended after Hegseth had an affair with a female work colleague.”

The fact that yet another male Fox News employee has been caught behaving badly suggests that there is something about the culture at the conservative propaganda network that encourages it, or at least doesn’t discourage it. The patterns are too consistent to regard it as coincidence.

Hegseth’s past is rife with problems that extend beyond his sexual misadventures. Prior to joining Fox News he was the director of a phony veterans group, Concerned Veterans for America, that was mainly funded by the Koch brothers. That, along with his military background, made him a candidate to replace the now-fired David Shulkin as Secretary of Veterans Affairs. Never mind that Hegseth has no experience in managing an organization with a $200 billion budget and 377,000 employees. Note: Trump just announced that his nominee to head the VA is his personal White House physician, Ronny Jackson, who also has none of the management experience required.

The operations Hegseth did head were found to have serious violations of ethics, if not law. At Concerned Veterans for America he hired his brother Philip with a six-figure salary. It was his first job out of college. And the APM Reports investigation also found that:

“In 2012, Hegseth formed MN PAC, an organization aimed at supporting ‘conservative candidates in contested races.’ But an analysis of the organization’s spending — less than $15,000 — shows it spent less than half on behalf of candidates. A third of the PAC’s funds was spent on two Christmas parties and reimbursements to Hegseth.”

Clearly this isn’t a case of a few bad apples. It’s evidence that Fox News is a breeding ground for perverts. They hire and promote men who blatantly demean and abuse women. The environment was described by former Fox News host and victim Andrea Tantaros in her lawsuit as “a sex-fueled, Playboy Mansion-like cult, steeped in intimidation, indecency, and misogyny.” And now Pete Hegseth joins the parade of misogyny that is the distinctive “quality” of working at Fox News and mirrors the depravity of Trump’s White House.

6 thoughts on “Here’s Another Fox News Sleazeball: Is Sexual Misconduct a Job Requirement at Fox?”