The past two years has been a veritable circus as Donald Trump clowned his way through the presidency. He’s proven beyond a shadow of doubt that he is utterly incapable of governing. His pathological lying and relentless boasting are the hallmarks of his oratory. And for some reason he insists demonstrating that he’s a complete imbecile who fails to understand the simplest concepts. 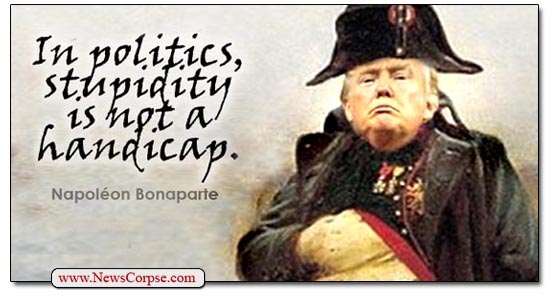 However, even with that record of buffoonery, Trump outdid himself in his speech yesterday that was supposedly about infrastructure. He spent maybe two minutes out of more than sixty on that topic, squeezed in between embarrassing exaltations of himself and infantile insults of his perceived enemies. But what distinguished this speech more than anything else were his own admissions of stupidity. It was a startling thing to watch. Here are a few of the things that Trump needed to make sure that everyone knew he couldn’t grasp:

He Doesn’t Know What a Community College Is:

Who doesn’t know what “community college” means? The phrase is its own definition. It’s a college that’s in the community. Is that so hard? What’s more, it is not the same as a vocational or technical school. Vocational schools generally focus on a specific skill such as nursing or mechanics. Community colleges are more like conventional four-year institutions with a broad range of study. They award Associates Degrees and are often starting points to pursue higher education. But Trump is fixated on the word “vocational” most likely because he just learned it. He has done the same thing with other words like “comprehensive” and “reciprocal” when those entered his vocabulary. He doesn’t realize that the rest of America already knows these words, or he assumes they’re as dumb as he is.

He Doesn’t Know That His Wall is Not Being Built:

Somebody showed Trump a picture of a wall under construction and told him it was the border wall that he has been yammering about for two years. It wasn’t. It was a part of a wall in California that was undergoing an upgrade that was approved by the Obama administration. However. Trump’s assessment of being better at building than being president is an easy call. Not because he was ever good at building, but because he’s better at anything than he is at being president.

He Doesn’t Know How Judges are Made:

“You know, when I got in, we had over 100 federal judges that weren’t appointed. I don’t know why Obama left that. It was like a big beautiful present to all of us. Why the hell did he leave that? Maybe he got complacent?”

Why? Because the Republican Senate Majority Leader, Mitch McConnell, deliberately refused to hold hearings or confirmations for President Obama’s nominees. This wasn’t a secret tactic that might have eluded Trump’s attention. McConnell did it openly and was criticized harshly for his perversion of democracy. But Trump thinks the vacant seats were the result of that black president being lazy. Cause you know how “those” people are.

Finally, Trump took to Twitter for another display of ignorance wrapped in a critique of one of his favorite foils. His tweet accused Jeff Bezos, owner of both Amazon and the Washington Post, of failing to pay taxes and exploiting the Post Office:

I have stated my concerns with Amazon long before the Election. Unlike others, they pay little or no taxes to state & local governments, use our Postal System as their Delivery Boy (causing tremendous loss to the U.S.), and are putting many thousands of retailers out of business!

Really? First of all, the Post Office is everyone’s “delivery boy.” It’s their whole purpose for being. And Amazon’s use of their services is actually a source of enormous revenue for them. Secondly, Amazon does collect sales taxes in every state in the country that imposes them. The fact that Trump doesn’t know this just shows that he has never bought anything from Amazon or bothered to ask anyone who has. His real target is Bezos, who he thinks is ordering the Washington Post to write critical stories about him. Also, it’s hypocrisy on a grand scale for Trump to criticize others for not paying taxes. He has bragged about not doing so and insisted that it was evidence of his genius as a businessman. At least Amazon’s tax releases are public information, unlike Trump’s.

It’s one thing for Trump’s critics to lay into him whenever he does something foolish. But it’s another when he himself admits his foolishness and seems to revel in it. But what’s really frightening is that there are so many people who hear these admissions and don’t find anything troubling about them. His disciples are members of his cult and blindly believe whatever he tells them, no matter how obvious the truth is.