Donald Trump’s lack of any political experience or intelligence has manifested itself in a multitude of ways. Most troubling are those wherein he implements policies that are overtly idiotic and harmful. But he also demonstrates his inability to govern by his appointments to critical White House and cabinet positions. These include his daughter Ivanka, her husband Jared, Ben Carson, Rick Perry, Scott Pruitt, etc. 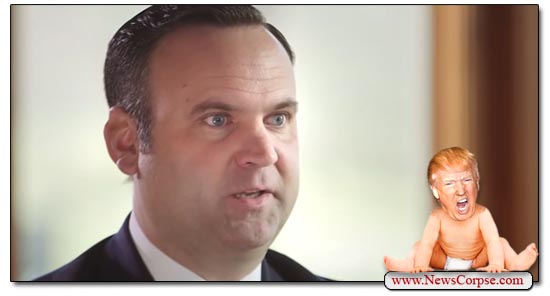 Now CNN is reporting that Trump has found a replacement for his departing White House Communications Director Hope Hicks. And he has managed to select another person who completely lacks the requisite skills and experience to do the job. According to CNN Trump has answered the question of Hicks’ successor:

“The answer, at least in some capacity, will be Dan Scavino, the social media director who this week moved into the minuscule office a pace or two from Trump’s desk that Hicks spent the last week packing up. Described by aides as Trump’s “mini me,” who can channel his moods and voice as few others can, Scavino is the last remaining staffer from the launch of Trump’s presidential campaign still posted by the President’s side.”

Scavino is presently Trump’s Director of Social Media, a post where he was responsible for the President’s Twitter, Facebook, and Instagram accounts. In other words, his most trusted and important confidant. But he doesn’t have any experience with managing the press or developing the strategic media operations of a large enterprise.

This promotion may cheer Scavino up after the announcement yesterday that his wife has filed for divorce. But his personal problems will not likely be separated from his official duties. As Director of Social Media, Scavino was the identified as the person responsible for an anti-Semitic tweet that put Hillary Clinton inside a Jewish Star of David and called her corrupt. On another occasion he was reprimanded for violating the Hatch Act, which prohibits electioneering by White House staffers.

But Scavino isn’t even very good at the job he has now. Being in charge of Trump’s Twitter account he shouldn’t be posting tweets that are flagrantly false (or considering who he works for, maybe he should). Such as the time he posted a video that he said was of the Miami International Airport during Hurricane Irma (it wasn’t). Or the posting that was supposed to be of a collapsing building in the Caribbean (it was in Tibet). Former Fox News host Megyn Kelly cited Scavino as a reason she received death threats during the campaign. And even though Scavino often advances conspiracy theories from sites like Alex Jones’ InfoWorld, he is still the person most retweeted by the President.

This is just the latest incompetent to get a big promotion from Trump. Earlier this week the President nominated his personal White House physician, Ronny Jackson, to be the Secretary of the Veterans Administration. Putting people like Jackson and Scavino in charge of agencies like the VA or the White House communications Office is like making a PC tech the CEO of IBM. Even a good PC tech cannot possibly do that job. But that’s what we’ve come to in the Era of Trump. He doesn’t actually know anyone with the requisite credentials to conduct the complex work of government. So he installs his friends and family from whom he can expect blind loyalty. And the nation is going to suffer as a result.