Hypocrisy is a common symptom of political pundits and politicians on both sides of the aisle. But there are times when the hypocrisy of starkly partisan shills goes completely off the rails. This is often seen on Fox News, the natural habitat of partisan hypocrites. 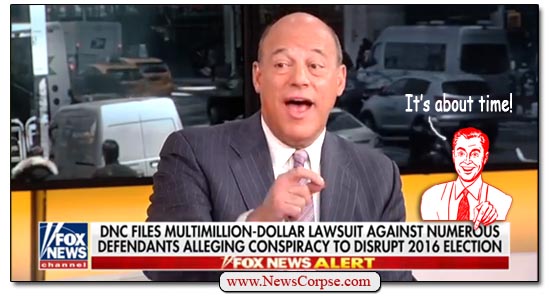 On Friday’s episode of Outnumbered, the featured “One Lucky Guy” (as they call their rotating guests) was former George W. Bush press secretary, Ari Fleischer. They were discussing the just filed lawsuit by the Democratic National Committee charging that the Russians, Wikileaks, and Donald Trump conspired to disrupt the 2016 presidential election. Near the end of the segment Fleischer decides to get all principled with a general denunciation of criminalizing politics:

Ari Fleischer: “Let me elevate all of this. This country has got to stop accusing its opponents of being criminals. I defended Barack Obama when Donald Trump said that he was illegitimate and born in Kenya. I don’t like saying the people you oppose on ideology are illegitimate. And now the Democrats are doing it to Donald Trump. The country has got to stop this.
Marie Harf: That’s just exactly what Donald Trump did. He’s still calling for his opponents to be jailed. So it’s not just Democrats who are doing it. It starts at the top.

First of all, there is no proof that he actually did defend Obama on the birther lies. In fact, in a tweet he declined to seek an apology from Trump for those conspiracy theories, and then tried to blame them on Hillary Clinton, which was a right-wing lie.

Fox News headlined this exchange on their website as “Democrats Must Stop Calling Opponents Criminals.” They linked to the video of the segment (posted below) to support their blatantly biased assertion that it is Democrats who are responsible for these rhetorical offenses. However, as Harf managed to squeeze in at the end of the segment, there is someone else who may bear some of the responsibility:

Comey drafted the Crooked Hillary exoneration long before he talked to her (lied in Congress to Senator G), then based his decisions on her poll numbers. Disgruntled, he, McCabe, and the others, committed many crimes!

DOJ just issued the McCabe report – which is a total disaster. He LIED! LIED! LIED! McCabe was totally controlled by Comey – McCabe is Comey!! No collusion, all made up by this den of thieves and lowlifes!

As it has turned out, James Comey lied and leaked and totally protected Hillary Clinton. He was the best thing that ever happened to her!

Crooked Hillary Clinton lied to the FBI and to the people of our country. She is sooooo guilty. But watch, her time will come!

…are now fighting back like never before. There is so much GUILT by Democrats/Clinton, and now the facts are pouring out. DO SOMETHING!

Hillary Clinton should have been prosecuted and should be in jail. Instead she is running for president in what looks like a rigged election

Obama never consulted with Congress about a prisoner exchange. HE BROKE THE LAW AND SHOULD BE TRIED. OUR PRESIDENT IS A TOTAL DISASTER!

Crooked Hillary Clinton is "guilty as hell" but the system is totally rigged and corrupt! Where are the 33,000 missing e-mails?