The news emanating from Donald Trump’s Circque Du Collusion continues to break with rapid fire reliability. Much of it this week has been centered on Trump’s “lawyer” Michael Cohen, whose prospects for remaining a free man are getting more remote by the hour. 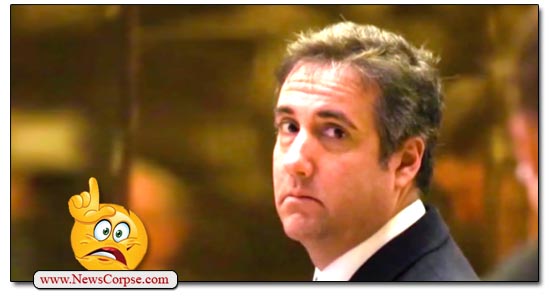 In just the space of a few days Cohen’s home and office were raided by New York prosecutors, he was forced to reveal that Sean Hannity of Fox News was his “secret” client (which Hannity denied), and a fellow attorney who is close to Trump told the President that Cohen was likely to flip and testify against him.

The latest embarrassing development to emerge is the announcement that Cohen is dropping a lawsuit that he filed against BuzzFeed News. The suit was in response to BuzzFeed publishing the infamous “Steele Dossier” that contained allegations of Trump’s unsavory connections to Russia, along with some salacious tales of engaging in “water sports” with Russian prostitutes.

Cohen’s objections, however, were the references to his alleged travels to Prague on Trump’s behalf to meet with Russian operatives and hackers. He adamantly denied having ever been to Prague in his life and insisted that he could prove it. He portrayed the dossier as outright lies that he would expose to save his reputation, and that of his primary client, Donald Trump.

And therein lies his problem. The likelihood of succeeding against BuzzFeed has decline in recent days. McClatchy News reported that special counsel Robert Mueller has evidence that Cohen did, in fact, go to Prague. And Cohen has failed to produce any of his alleged proof that he didn’t. Consequently, proceeding with the lawsuit presents more risks than benefits.

Should Cohen persist in this litigation he would be required to sit for a deposition with lawyers from BuzzFeed. They would surely ask him about his travels and the supposed proof that he was never in Prague. His answers would be under oath. What’s more, the discovery process would require him to hand over any and all documents (letters, itineraries, receipts, phone calls, emails, etc.) pertaining to his whereabouts during the time in question.

By backing out of this lawsuit that he was so confidant of winning, Cohen is sending the message that he is more worried about coming clean than he had previously let on. He is signaling that the evidence might actually prove that he was in Prague. And the depth of the discovery could even verify who he was meeting with when he was there. In other words, continuing with the suit could wind up getting him in even deeper legal trouble.

It should also be noted that Cohen’s legal bills are being paid by the Trump campaign. More than $200,000 of Trump’s donor’s money has already been paid to Cohen’s attorneys. However, the Trump campaign cannot bankroll the BuzzFeed litigation. It’s unknown whether that had any impact on the decision to drop the suit. Cohen presumably could pay for his own legal representation. After all, by his account he had the wherewithal to pay Stormy Daniels $130,000 in hush money out of his own pocket. So it’s more likely that his reluctance to proceed with the suit was due to legal jeopardy than financing. And he still isn’t out of hot water. Stay tuned.