For many years now Fox News has occupied the top of the ratings for cable news networks. Although they are getting beaten on a regular basis by MSNBC’s Rachel Maddow and others, they still generally outperform their competition, but by much smaller margins than in the past. 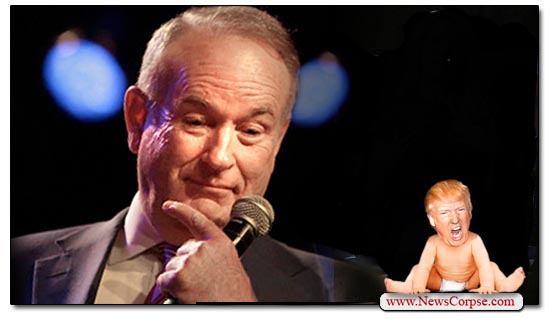 What is not heralded as much by Fox News public relations is their uncontested position as the premiere “Sexual Predator Network.” Fox has a history with sexual deviants who were shielded, and even promoted, within their dysfunctional corporate family. They include the former CEO, Roger Ailes, and their once top star, Bill O’Reilly. Even Donald Trump, now better known as the pervert in the White House, was once another pervert on Fox News with a regular segment on Fox and Friends.

In addition to those perpetrators of sexual harassment and abuse, Fox News is crawling with infidels who cheat on their spouses with underlings on the job. Host Ed Henry was suspended for several weeks after his affair was publicized. But Trump fave Pete Hegseth and O’Reilly spawn Jesse Watters were never punished for the very same exploitative behavior.

However, Fox News may have some competition in the debauchery business. The New York Posts’ Page Six is reporting that the conservative news outlet Newsmax is in talks to bringing Bill O’Reilly back to the airwaves. Presumably because America has been missing the insights of a deviant who has paid out more than $32 million to hush up his personal sex scandals. Newmax must believe that the nation still wants to hear from people who have disgraced themselves through abhorrent mistreatment of women colleagues.

To make matters worse, Newsmax is also said to be courting former Fox News host Eric Bolling, who was fired for sending obscene photos of himself to his coworkers. Former Fox News host Greta Van Susteren is also in Newsmax’s sights as a recruitment target. Van Susteren herself has not been accused of any sexual misconduct, but she has said that such behavior at Fox News contributed to her reasons for quitting. According to Page Six, this line up (plus former Trump press secretary Sean Spicer) would form the basis for the Newsmax primetime block:

“An insider told Page Six, ‘The deals are not done yet, but talks are in the advanced stages, certainly with O’Reilly. The thinking is, following a 6 p.m. news show, Greta would anchor the 7 p.m. hour, O’Reilly would be back at 8 p.m., and Bolling could smoothly continue on at 9 p.m. Spicer and his cohorts would go on at 10 p.m., with the later slot allowing the show to be looser. But the deals are not yet signed and sealed.'”

The regrouping of these Fox News rejects is less surprising when you consider that the Newsmax Media CEO Christopher Ruddy, is a close friend of Fox News addict, Donald Trump. Ruddy previously brought in ex-Fox EVP Michael Clemente to run the his broadcast division. So it looks like they’re trying to get the band back together. [For what it’s worth, a source close to Newsmax told Brian Stelter of CNN that “there have been no negotiations at all.”].

But in reassembling some of the most repugnant characters, who were even too disgusting for Fox to continue employing, Newsmax is setting itself up to take the sexual predator crown from Fox. Perhaps they could bolster their schedule by reaching out to Charlie Rose and Matt Lauer. Maybe some comic relief with an all new Bill Cosby Hour. And all of it could be produced by Harvey Weinstein. Newsmax can probably get all of this “talent” at a considerable discount from their previous salaries. And they would surely appeal to disaffected Fox fans who don’t think the network is misogynistic enough.

One thought on “In Challenge to Fox News as the ‘Sexual Predator Network’, Newsmax is Courting Bill O’Reilly”