It’s the morning after Donald Trump’s Celebrity Apprentice: Singapore Fling. And the consequences of sending an ill-informed man-child to conference with an international thug are beginning to sink in. The accomplishments that Trump predictably brags are the greatest of any human endeavor in the history of mankind are clearly a bundle of unconfirmed promises by two unreliable and notoriously dishonest leaders. 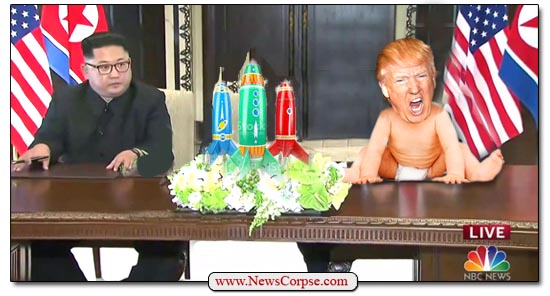 There will be an enormous amount of analysis of the event and its eventual repercussions. Fox News will hail Trump as the Second Coming and push for a Nobel Prize. Less biased news outlets will likely explore the complicated nature of international relations and the difficulties of implementing and certifying long-term agreements. So for the time being, News Corpse will simply provide a record of some of the dumbfounding (with an emphasis on the “dumb”) remarks that Trump made during a media event following the summit with North Korea’s Kim Jong Un. So without further ado, here are. . . . .

“This is a big gathering of media, I will say. Makes me feel very uncomfortable.”
Of course it does. Any exposure to the free press threatens to reveal your innate deceit and corruption.

“Kim wants to do what’s right.”
Naturally, That’s the first inclination of all murderous tyrants.

“We signed a very, very comprehensive document and I believe he will live up to that document.”
Actually, the document specifies nothing, contains no details for implementation, and merely indicates an intention to talk more in the future. Still, your confidence in Kim’s utterly unproven sincerity is so sweet.

“We got to know each other well in a very confined period of time.”
Kind of reminds me of when George W. Bush “looked [Putin] in the eye” and got “a sense of his soul.” That worked out well.

“Chairman Kim has an opportunity like no other. To be remembered as the leader who ushered in a glorious new era.”
Which is much better than being remembered for committing human rights abuses on hundreds of thousands of your own people.

“We have 32,000 soldiers in South Korea. I would like to be able to bring them back home.”
Something tells me that the people of South Korea and Japan, as well as Americans concerned about world security, wouldn’t like that very much.

“We will stop the war games which will save us a tremendous amount of money.”
And also insure that we’re unprepared in the event that North Korea doesn’t comply with their promise to work toward denuclearization. (p.s. It aint that much money and South Korea pays much of it).

“What did they do to justify this meeting? Secured commitment for complete denuclearization. That’s the big thing.”
That would be a big thing – if they had actually done it.

“We have a tremendous, tremendous deficit in trade. Commonly known as a trade deficit.”
Thanks for that explanation, Einstein.

“Are there recordings of [the Trump-Kim meeting]? […] I have one of the great memories of all time. I don’t have to do that.
Except that Trump couldn’t even remember saying that he has “the world’s greatest memory.”

“I may be wrong. I may stand before you in six months and say, hey, I was wrong. I don’t know I’ll ever admit that. I’ll find some excuse.”
Really? Here we have the President saying explicitly that he will lie and that he will never take responsibility for his failures. Of course, we already knew that about him, but this is the first time he’s admitted it himself, in public.

It’s hard to comprehend that the person making these statements is the sitting President of the United States. And it’s even harder to imagine the potential harm that he’s capable of doing if left to his devices. Many politicians and pundits are now calling for the country to unite behind Trump and hope for his success in these endeavors. And of course, all Americans want to see a lasting peace in the world and a reduction in the threats that nuclear arms represent.

Unfortunately, Trump provides little confidence that he’s someone who’s capable of achieving those goals. His record consists mainly of antagonizing our allies and cozying up to our enemies. And that’s when he isn’t colluding with them to steal our elections or pocketing cash from his corrupt business enterprises.