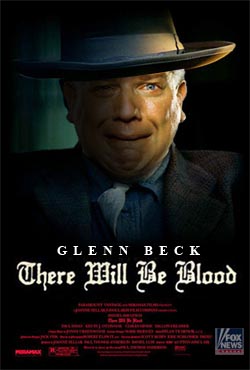 Look out Lizard People. Glenn Beck is on to you. He has uncovered the dusty scrolls and connected the dots and discovered the plot by the vast network of enemies that are seeking his downfall. And he will not yield.

To demonstrate his resolve, Beck took to the airwaves yesterday and compared himself to “the enlightened one,” Buddha. I guess his prior Messianic aspirations weren’t doing the job so he’s bringing in spiritual reinforcements. And for good measure he compared his TV sermonizing with the teaching of slaves to read. But he wants more than literacy. He insists that if you don’t use the information he provides to “move the country forward” then “it’s just another form of entertainment, and that’s not what this show is.” Funny, that’s not exactly what he said in an interview with Forbes last year:

“I could give a flying crap about the political process. […] We’re an entertainment company.”

But that was then and this is now. And now he is under siege. There is an unprecedented assault on all that is good, and he is the sole obstacle to the looming menace. Take heed America:

“I don’t think since the 1930’s we have seen such a growth of profound evil in the world. And it seems to be growing at an exponential rate. The way to fight it is to expose it. Evil hides in the shadows. This is something that I think we all know even as kids.”

Beck then relates a charming story of how his children at bedtime asked him to leave the lights on and check their closets. Of course there is never anything to fear in these dark recesses of his kids imaginations. Yet Beck draws a moral from this that…

“We know as children bad things can hide in the dark.”

No we don’t! We have irrational fears as children that we eventually grow out of. Then some us start listening to fear merchants like Glenn Beck and have to start checking under the bed again for communists, Muslims, and community organizers. Beck even joked that he had to restrain himself from pretending that there really were monsters in the closet. He may have controlled that impulse in his son’s bedroom, but he indulges it every day on television. Later in the program he insists that he isn’t trying to scare anyone. “I don’t ever want to frighten you,” he says. But that contradicts what he said just a few days ago (2/4/11) when he told his viewers that “If you haven’t been frightened yet, oh you will be. You will be.” Which is it, Glenn?

He revealed a bunch of blackboards on which were written what he said were his predictions that had come true. He led off with “We will have universal healthcare.” Not only did that not come true, it was never even included in the debate over health care reform. He continued with numerous other examples of predictions that only came true in his mind.

All of these self-congratulatory fantasies were designed to bolster his sense of infallibility leading up to a condemnation of conservative pundits who lately have been turning against Beck. Many in the right-wing establishment have recognized that Beck’s delusions are casting a shadow of crazy over all of them and they are beginning to resent it. Beck’s television audience has been slashed by half in the past year. His radio presence is also faltering. He was recently dropped by stations in both New York and Philadelphia due to low ratings. Consequently, critics on the right are finding their courage as Beck’s aura fades.

Beck regards these events as the seeds of a conspiracy to discredit him. On his radio show this morning he said just that:

“I think there’s something happening with the Republicans and the the right that is disturbing. There was a time that the Republicans and the right, if you will, didn’t mind the Tea Party. They used them as fuel. […] Anyone that talks about freedom, or is a real wild card that can hurt the party, are they being politically assassinated at this point?”

However, I’m not sure that Beck knows what the word conspiracy means. In yesterday’s program he complained that he had been accused of calling the uprising in Egypt a conspiracy of Islamic radicals and American leftists. He insisted that he had not done so. He merely said that they were “like-minded” and were “working together.” See? No conspiracy.

What’s happening is that Beck is hunkering down into his bunker. He is feeling the heat and thrashing out wildly in self-defense. Despite all the evidence, and agreement across the political spectrum, Beck is affirming his paranoid nightmares. He is digging in his heels. And he is accusing his critics of engaging in a vast conspiracy to ridicule and/or silence him.

This isn’t the first time he has responded this way to criticism. Last year when he was coming under fire for associating social justice with Marxism, he had a similar overreaction that sparked his paranoia:

“Is it possible, maybe, that pointing out every night that there are radicals, Marxists, and communists, in the White House, maybe that struck a nerve? Has someone decided that they must destroy my career and silence me because we’ve stumbled onto something?”

There you have it. Glenn Beck has been the target of an evil cabal for months, maybe years. Now that cabal is coming out of the shadows and includes such nefarious radicals as Rich Lowry of the National Review and William Kristol of the Weekly Standard and Fox News. And it is making Beck nervous – and desperate. That’s why he is devoting several days of his program to defending himself and attacking his perceived enemies. For all the fear that Beck is disgorging, it is he who is the most fearful. And it shows in his flailing and panic.

Let me be the first to say that there is no conspiracy against Glenn Beck. It is just a bunch of like-minded people working together to correct the disinformation that Beck disseminates. All we want is to offer up some truth and reality in place of the lies and delusions that are Beck’s specialty. If that results in Beck having to take his Freak Show underground, all the better. I’m sure he would be more comfortable there anyway, with his friends Alex Jones and the folks at the John Birch Society.

5 thoughts on “The Conspiracy Against Glenn Beck”