A press release this afternoon revealed that Keith Olbermann would be announcing his next career move Tuesday morning in a conference call with the press. That release served as the starters pistol for a pack of media dogs to try to figure out what was up before the appointed time.

The New York Times appears to have won the race with a story that quotes anonymous sources saying that Olbermann will announce a pact with Al Gore’s Current TV. The details are sketchy, but they include an on-air presence for MSNBC’s former star attraction, as well as an equity stake in the company.

Current has had trouble getting traction as a network whose brand identity is rather mysterious. The network certainly didn’t take on the role that many had expected when it was first announced that Al Gore was starting a cable channel. Many assumed that it would be a liberal answer to Fox News, but that never transpired. Instead, it attempted to invent a new genre that melded television and the Internet.

This could be an interesting arrangement. If Olbermann is coming aboard to launch a news division (Current Affairs?), he could restore some of the original excitement that buzzed around the network when it launched. It would not have to be a wholesale reorganization. They could just add a couple of personalities and, if I had my way, a media analysis program that reviewed the other broadcast and cable news outfits (Alternating Current?). And there’s a place for comedy as well. Any of these programming options would work within Current’s current ambiguous identity.

Current TV is presently seen in about 65 million U.S. homes. That’s about 20% less than MSNBC. For Olbermann this might look like a step backwards, but for Current it could be the catalyst that would help them break through to the upper tiers of cablecasting. They could leverage his star power to get more carriage and better channel positioning. And Keith would be able to extend his presence to the Internet with a full service news and entertainment site along the lines of the Huffington Post. Speaking of which, now that HuffPo has accepted gobs of cash to be part of a bigger media corporation, the Internet is in need of a new independent source for progressive news. And HuffPo’s sale demonstrates the potential value of the genre. 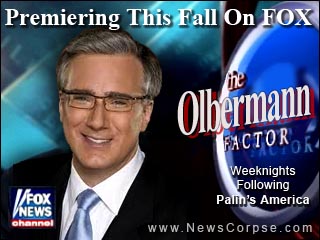 Needless to say, this is all wildly speculative. Tomorrow morning’s announcement may surprise everyone and have nothing to do with Current. Or it may involve Current but in ways not expected. We’ll know soon enough. But there is one scenario that I think we can safely rule out. Olbermann will not be returning to Fox. Rupert Murdoch recently said that he doesn’t want to fire him twice. But you really have to question Murdoch’s judgment when it is Olbermann whom he has called “crazy,” not Glenn Beck.

The news is official. Olbermann will be joining Current TV and bringing Countdown with him. In addition to that he will assume the title of Chief News Officer, implying a larger role in the production of news programming for the network. That is what I proposed above and it looks like they took my advice (leave me to my fantasies). Now, hopefully they can put together a compelling schedule and push the network onto more cable systems and into more homes.