News Corporation Chairman and CEO Rupert Murdoch has resigned and left New York City for his resort in Montauk ending his fifty year reign as a media monarch. 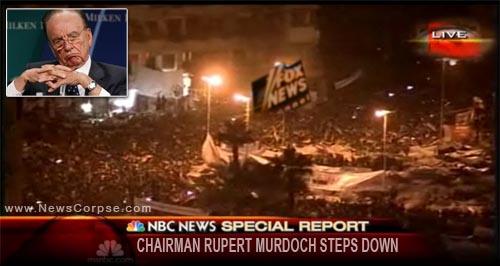 The era of Murdoch has officially ended and citizens the world over are celebrating. There has been no word yet as to the whereabouts of Fox News CEO Roger Ailes, but reports indicate that the news enterprise is being handed over to leaders within the Public Broadcasting System.

The announcement, delivered during Fox & Friends, set off a frenzy of celebration, with protesters shouting “America is free! No more lies! No more lies!”

PBS issued a communique pledging to carry out a variety of media reforms in a statement notable for its commitment to diversity, independence, and free speech. PBS’s statement alluded to the delegation of power to local broadcasters and it suggested that NPR would supervise implementation of the reforms.

Responding to the rapidly unfolding events, the White House released a statement saying that they are monitoring the situation closely and the President will speak directly to the issue very soon. The spokesman added that, “We are hopeful for a positive outcome and we congratulate the American people for their stunning and well-deserved victory.”

A thrilled Keith Olbermann said, “The American people have won. But it is now up to us to insure that journalistic ethics are restored and maintained.” Senator Al Franken, a former comedian and radio broadcaster, stopped to comment on his way to an emergency White House briefing and told reporters, “Ha ha ha ha ha. Oh God. Ha ha.”

Glenn Beck was reached at his gold-brick bunker in South Dakota surrounded by an armory and barrels of non-fluoridated water. But when asked for a comment he shouted from a crack in the door. “Marxists. Oh Mommy, Marxists. The Archduke Ferdinand Caliphate has begun. I won’t talk to the Jew media. Leave my property and take George Soros with you.” He then commenced firing genetically modified corn seeds at the press causing numerous tiny bruises, but no serious injuries.

The State Department was in disarray as news reports continued to update the situation. As diplomats scurried from ….. Oh wait a minute. There is new information coming in over the wire right now. What’s that? What is…..It wasn’t Murdoch, it was Mubarak?

8 thoughts on “Jubilant Crowds Rejoice As Murdoch Steps Down”