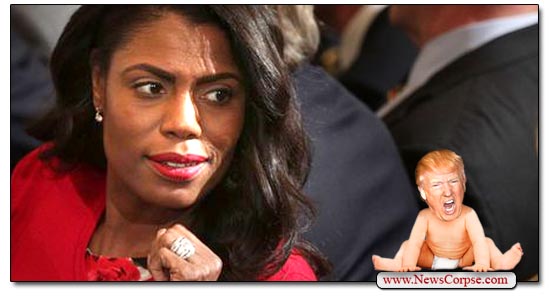 Worse than Trump’s childish lashing out at someone he once considered a friend and close advisor, is what his attacks say about him and his management capabilities (or lack thereof). Here is what Trump posted to Twitter in the early morning hours when he was avoiding doing president stuff:

Wacky Omarosa, who got fired 3 times on the Apprentice, now got fired for the last time. She never made it, never will. She begged me for a job, tears in her eyes, I said Ok. People in the White House hated her. She was vicious, but not smart. I would rarely see her but heard….

…really bad things. Nasty to people & would constantly miss meetings & work. When Gen. Kelly came on board he told me she was a loser & nothing but problems. I told him to try working it out, if possible, because she only said GREAT things about me – until she got fired!

While I know it’s “not presidential” to take on a lowlife like Omarosa, and while I would rather not be doing so, this is a modern day form of communication and I know the Fake News Media will be working overtime to make even Wacky Omarosa look legitimate as possible. Sorry!

Note that Trump begins with another infantile nickname that has become the hallmark of his personal relationships. It’s not even an original nickname since he’s used it many times before on Tom Steyer, Rep. Frederica Wilson, Maureen Dowd, and Glenn Beck (I’ll give him credit for that last one).

But more to the point, by Trump’s own account he hired Omarosa after he previously fired her three times from his goofy TV game show. The question is why? And that’s a question he answered himself in the same tweet: because she cried. That’s a great resume item, isn’t it? Then he gave her, not a pity job, but a senior post in the White House with the top salary permitted. And it gets worse. Trump then ignored all the allegedly terrible things he heard about her and allowed her to remain on the job. Even after his Chief of Staff, John Kelly, advocated her dismissal. And his reason for clinging to her was as illogical as his reason for hiring her: she flattered him.

Then Trump tweets his acknowledgement that he’s behaving like the man-baby he is, but continues behaving that way anyhow because – well, because he’s Trump, the man-baby. It is literally impossible for him to adopt the demeanor of a mature leader because he simply doesn’t have it in him.

And finally (so far), Trump tweets about the non-disclosure agreement he makes his associates sign. So now he’s bragging about being the least transparent president in history. He’s actually proud that he’s purposefully concealing information from the American people he’s supposed to be serving. Much like his unprecedented refusal to release his tax returns despite the accumulated evidence of his financial corruption and collusion with Russia. What’s more, these NDAs are unenforceable and possibly illegal.

All of this points to a man who is utterly unfit to be president. He has made staffing decisions like this throughout his administration. People like Mike Flynn, Steve Bannon, Scott Pruitt, Betsy Devos, Ben Carson, Rick Perry, Anthony Scaramucci, Paul Manafort, etc., are examples of the total lack of thoughtful consideration required by someone in this position. And now the Senate is supposed to take his nomination of Brett Kavanaugh to the Supreme Court seriously? Trump has always been the “king” of his (failing) business enterprises, and he thinks the White House works the same way. It doesn’t. And he’s going to find out soon enough: #MuellerTime