There is little doubt that Donald Trump has disgraced this nation for most his adult life. Beginning with his evasion of the draft during the Vietnam War (with five deferments for such nonsense as bone spurs), to his conspiring with Russia to interfere with a presidential election. And in between he sought only to increase his own wealth, although he failed badly at that as well (at least six bankruptcies). 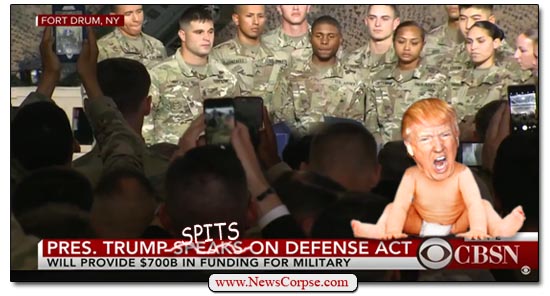 So it isn’t out of character for Trump to spend this Monday padding his resume of shame with actions that exacerbate the humiliation most Americans feel when he comes to mind. To start off, the FBI made a purely political decision today to fire special agent Peter Strzok, a man with a long record of exemplary service to his country. Whatever one thinks of his recent emails expressing his personal (and well founded) disgust with Trump, that is a small matter when juxtaposed with his two decades in the Bureau.

An internal investigation by the FBI’s Inspector General found that at no time did Strzok allow his personal opinions to affect his official duties. Nevertheless, Trump and his human shields at Fox News smeared him and demanded his head. Trump even posted some celebratory tweets following the news that Strzok was fired. For his part, Strzok behaved with restraint and honor by simply tweeting a response by his lawyer to this unfair termination, which overruled the more lenient and reasonable recommendation of the head of the FBI’s Office of Professional Responsibility.

In the meantime, Trump himself visited Fort Drum in Jefferson County, New York, to have a signing ceremony for the John S. McCain Defense Authorization Act. In a speech that dragged on for more than half an hour, Trump never mentioned McCain’s name once, and conspicuously referred to the bill as simply the Defense Authorization Act. It was a petty and deliberate insult to the veteran McCain, who Congress honored by attaching his name to the bill, and who is at home in Arizona fighting brain cancer.

Additionally, Trump took much of the credit for the bill by explicitly citing himself as having been “a big, big, part” of making it happen. He wasn’t. But he did manage to insult the troops in the audience. Referring to a recent pay hike, Trump said they didn’t really care about it and asked “Does anyone not want it?” When few raised their hands he was visibly disturbed by the rejection of his premise and asked “Are these real patriots here? What’s going on?” What’s going on is that our soldiers are already underpaid and they need more funds to support their families. They aren’t wealthy jerkwads like Trump.

What’s more, Trump turned this event into a political affair by rattling off the same old tired list of things he claims, falsely, to have accomplished. This list had nothing whatsoever to do with the defense bill or the troops at hand. Even worse, he promoted congressional Republicans who are presently embroiled in tough midterm campaigns. Obviously the only audience he was speaking to was the national one that this speech was being broadcast to in the media.

Speaking of the media, Trump found a way to work in his usual anti-free press attacks on the media in a sickly, passive-aggressive way:

“I’m so proud of myself I didn’t call them the “fake news” media. I said to myself, ‘I will not today, in front of our great Armed Forces, call them the fake news.’ We know the real truth, but we won’t say it today”

So you’ll notice that he just called the press “fake news” – TWICE – in that bit of foolishness that didn’t actually fool anyone. And what he implied would be disrespectful to the troops were he to do it, he openly did anyway. He clearly doesn’t have the self-restraint or maturity to serve as president, and hopefully there will soon be a legal correction to that unfortunate error.