The single most damaging witness so far for the confirmation of Judge Brett Kavanaugh to the Supreme Court of the United is without a doubt – Brett Kavanaugh. His opening statement was an extended, foaming at the mouth diatribe filled with invective and grievances against his perceived enemies. Donald Trump made it known that he was unhappy with Kavanaugh’s performance during his pitiful interview on Fox News. But if he thinks this was the way to rehabilitate his tattered reputation, he’s only proving that his faulty judgment makes him unfit to serve on the Supreme Court. 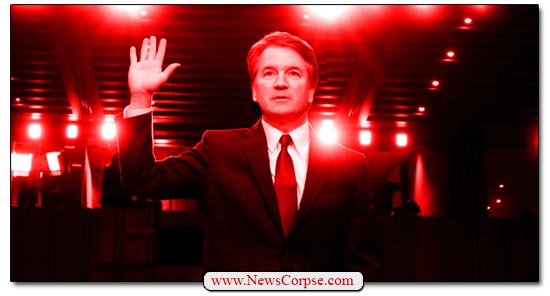 The most notable impression left by Kavanaugh will be that he was furious with the women who were making allegations about his behavior, and with the Democrats in Congress who are seeking the truth. But his unhinged harangue will be viewed after the fact as detrimental to his confirmation. The spectacle of a potential justice of the Supreme Court throwing a public tantrum like this only reinforces the opinions of those who believe that he doesn’t have the temperment to do the job.

No one would hold it against him that he cried during his testimony. Well, no one except the President of the United States, Donald Trump. On more than a few occasions Trump has mocked others for showing such emotion. He routinely referred to Senate Democratic Leader Chuck Schumer as “Cryin’ Chuck.” Should we expect a similarly disrespectful tweet from the President about “Cryin’ Brett”? And if Trump was disappointed with Kavanaugh’s appearance on the friendly Fox News network, what must he be thinking now after this extended display of shouting and weeping? If anything, it makes the charges that he is a belligerent drunk more believable.

Perhaps the most harmful part of Kavanaugh’s rant was his ferocious condemnation of Democrats. He implied that they had “laid in wait” and plotted to “blow me up and take me down.” His repetitious attacks made it clear that he regards the party as a political foe. He accused Democrats of conducting a campaign against him that was “well financed” by some unnamed and evil benefactor (George Soros?). He described their opposition to him in conspiratorial terms resembling Trump’s references to a “Deep State” cabal. Specifically, Kavanaugh said that his critics were deploying a “political hit” as “revenge on behalf of the Clintons.” Seriously?

With that sort of brazen and vile partisanship, how can Kavanaugh be relied upon to be a neutral arbiter of the law? His extreme prejudice is starkly apparent. And whether or not one believes he has justification to feel this way, it disqualifies him to be a justice whose impartiality is mandatory. No judicial authority can be allowed to harbor such obvious biases. He could certainly withdraw and run for the senate, where his partisanship would be expected. But he has morally resigned as any kind of judge and now needs to recognize that fact and resign in reality.