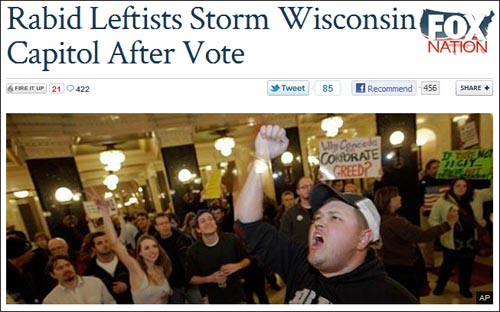 The headline “Rabid Leftists Storm Wisconsin Capital After Vote,” was a deliberately incendiary invention of the Fox Nationalists. The article to which this item linked was in the Wisconsin Journal Sentinel with a much less provocative headline: Demonstrators crowd Capitol in wild scene after Senate vote. And it’s not like this is an isolated event either: 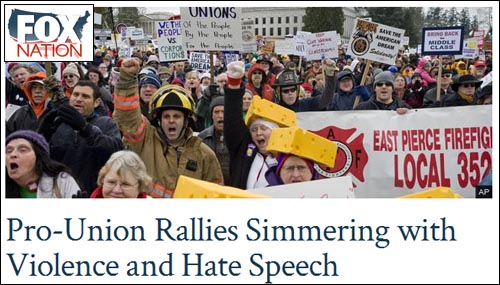 This is a concerted propaganda campaign by Fox to demean and demonize law-abiding demonstrators. The “rabid leftists” to whom Fox refers are in fact Wisconsin citizens. They are teachers, farmers, homemakers, and even the very police officers on duty in the capital building. They are Americans exercising their Constitutional rights to free assembly and speech. They are peacefully and respectfully redressing legitimate grievances.

Contrast this with the way Fox characterized the Town Hall protesters who opposed health care reform just two years ago and attempted to suppress the free speech rights of reform advocates:

Note how the Fox Nationalists celebrate this rabid assemblage that even features a likeness of the President as Hitler. That’s the sort of rhetoric and imagery that Fox likes to pretend never existed, but this was the headline on their web site on August 13, 2009.

So one crowd of angry but peaceful protesters, disgusted by a Republican ploy to steal from them both their rights and their votes, is portrayed as “rabid leftists.” But another crowd of racist and offensive protesters, seeking to kill legislation that would provide health care to millions without coverage, are portrayed as patriots. That’s the Fox News model of fairness and balance.

Ironically, the story at the bottom of the list in that image, regarding the awakening of a “sleeping giant,” is just as relevant today if you insert Governor Walker’s name in place of Obama. Despite the extremist and illegal actions on the part of the Wisconsin GOP, this dispute is far from over. The people are not going to take this laying down. This is what we’re fighting: