The new year has started off with big bang for MSNBC and its star anchor Rachel Maddow. For the past couple months her program has been smothering her Fox News competition, Sean Hannity. It began immediately after the midterm election on November 6th and hasn’t slowed down since. And January’s results confirm that it was no fluke. Maddow has definitely caught fire and her sharp analysis and engaging manner of unfolding complex subjects is clearly winning over viewers. 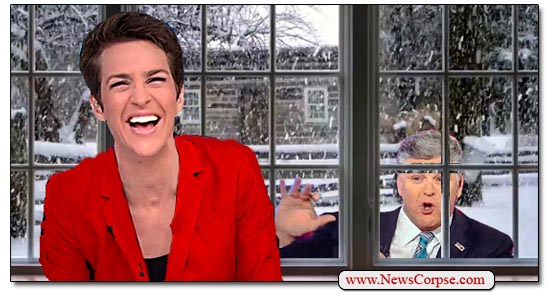 Some of the highlights from the January Nielsen ratings include that Maddow was the number one non-sports show on all of cable, not just just news programming. She dominated in both total audience and the advertiser friendly 25-54 demographic. Her success helped drive up the performance of her primetime colleagues Lawrence O’Donnell and Brian Williams. In fact, that bloc of programming won every hour for the entire month.

Maddow’s show contributed to MSNBC’s impressive audience growth. It gained fourteen percent in total day, and six percent in prime time versus January 2018. During the same time period Fox News declined significantly. It’s total day viewership was down eleven percent. In primetime Fox News lost ten percent. And those numbers were even worse for in the 25-54 demo: down twenty-one percent total day, and twenty percent in the demo.

Almost as satisfying as Maddow’s success is the failure of Fox’s Sean Hannity. Once the unchallenged cable news champ, Hannity’s total ratings crashed nineteen percent since the midterms in November. His fall in the demo was a massive thirty percent. His Fox News lead-in, Tucker Carlson, didn’t fare any better. He was Fox’s top program, but he trailed Maddow by seventeen percent in total audience, and by nineteen percent in the demo. It’s a relief to know that America’s television viewers are recognizing the hatred and racism that emanates from the likes of Carlson and Hannity and are changing the channel.

What’s more, Carlson and Laura Ingraham are suffering from an advertiser exodus due to their offensive positions. Carlson mainly for his open advocacy of white nationalism. And Ingraham for her attacks on the kids from Parkland, Florida, who survived the school shooting last year. So their shows are not only losing viewers, but they aren’t making any money either.

In addition to the solid wins by Maddow, there was good news in January’s numbers for the rest of the MSNBC roster. The Last Word with Lawrence O’Donnell and The 11th Hour with Brian Williams were both number one in both total audience and the demo. Morning Joe rose fourteen percent while its competition, Fox and Friends, sunk ten percent. Hardball was number one in total viewers. And the programs hosted by Chris Hayes, Ari Melber, Stephanie Ruhle, Hallie Jackson, Craig Melvin, Andrea Mitchell, Ali Velshi, and Katy Tur all posted record numbers. One particular standout was Deadline: White House with Nicolle Wallace, which was number one in total viewers, beating perennial Fox News host Neil Cavuto.

The days of Fox News dominating the cable news ratings are definitely over. And thanks for that should go to Rachel Maddow for redefining how a successful news program can be produced. She does not follow the daily tweetstorming of the President, and never hosts panels of belligerent partisans yelling over each other. She presents detailed examinations of serious issues in an honest and accessible way, and respects her audience.

But some thanks should also go to Donald Trump for behaving like a loathsome cretin whose flagrant lies are driving away whatever few rational thinkers are still left watching Fox News. Those who remain are the barrel-bottom crud who enjoy wallowing in ignorance and will never be pried loose from their cult worship.