The walls are closing in around Donald Trump. And they aren’t the walls that he is obsessed with building on the southern border. More of the criminal associates that comprise Trump’s inner circle are being swept up by the long arm of justice every day. And with each new arrest and indictment the evidence of Trump’s culpability becomes more apparent. 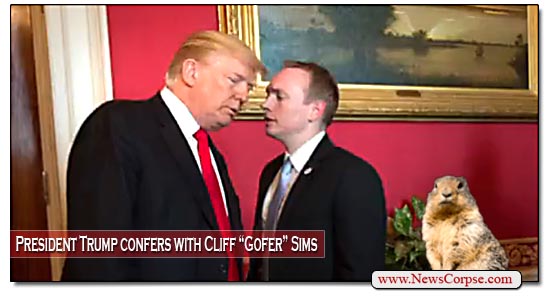 The latest accomplice to Trump’s treason to face the music is Roger Stone. He has been a close friend and associate of Trump’s for decades. Now he has been charged with lying to Congress, witness tampering, and obstruction of justice. Trump’s defenders celebrate the fact that the word “collusion” isn’t spelled out in the indictment. But what do they think Stone was lying about? What do think he was threatening other witnesses about? What unlawful activity do they think he was endeavoring to obstruct?

As a result of this devastating blow to Trump World, the President is behaving typically frightened by another event that puts him at great risk. And consistent with his pattern of behavior, he is lashing out in desperation and hoping it takes some of the heat off. But his actions expose his abject fear.

Cliff Sims was Trump’s White House Communications Director for Message Strategy. That’s a post within the White House Press Office where Sims worked closely with Sarah Huckabee Sanders, Kellyanne Conway, and Bill Shine. He held the position for about a year and a half, which is a lifetime in the Trump Administration. Sims just published a book about his experience (Team of Vipers) that is not sufficiently adoring of Trump. Consequently, on Tuesday morning Trump posted a tweet attacking and threatening Sims, who Trump now pretends he hardly knew:

A low level staffer that I hardly knew named Cliff Sims wrote yet another boring book based on made up stories and fiction. He pretended to be an insider when in fact he was nothing more than a gofer. He signed a non-disclosure agreement. He is a mess!

This raises a couple of obvious questions. First, precisely how many gofers and “coffee boys” work for Trump? It seems like everyone who has written a tell-all book has turned out to be a nobody who Trump never met, despite all the photos of them together. And second, how does Trump know the book is boring since he surely hasn’t read it. He hasn’t even read the three dozen books he endorsed in his Book Club for Dummies.

More importantly, Trump’s tweet contains an overt threat. His reference to a “non-disclosure agreement” can only be interpreted as Trump’s intention of filing a lawsuit against Sims for speaking out. And that isn’t an idle threat. There is already a notice posted by Michael Glassner, the Chief Operating Officer of Donald J. Trump for President, announcing that “The Trump campaign is preparing to file suit against Cliff Sims for violating our NDA.”

There are some obvious flaws to that legal strategy. First of all, how can they sue for a violation of a non-disclosure agreement if the the President himself is asserting that the book consists of “made up stories and fiction”? There is no violation if no truthful information is revealed. So either what’s in the book is actually true, or the lawsuit is null and void.

What’s more, non-disclosure agreements are not permitted for White House staff. That’s because they do not work for the President. They work for the United States government. So the government would have to be the plaintiff in the lawsuit. But the First Amendment prohibits the government from “abridging the freedom of speech.” The government can’t sue someone for exercising their constitutional rights.

So Trump is acting out in precisely the manner you might expect from anyone who is flagrantly guilty of serious crimes. He is trying to deflect blame to other less powerful subordinates. He is hoping that the public and the press can be distracted by his frantic gesturing toward some other shiny object. And he is pretending that he has no relationship with those who are implicating him, despite the fact that that relationship is public knowledge and well documented. It’s a sad and pathetic display of desperation that only makes Trump look more guilty. However, Sims should send Trump a “Thank You” note for helping to sell a few thousand more of his books.