The testimony in the House Oversight Committee by Donald Trump’s longtime personal attorney, Michael Cohen on Wednesday provided both fireworks and yawns. Much of what was discussed was already known, but was given more weight by the dramatic nature of a congressional hearing. The fireworks were mainly due to Republican efforts to malign Cohen while obediently defending the President and deflecting from any potentially bad news. 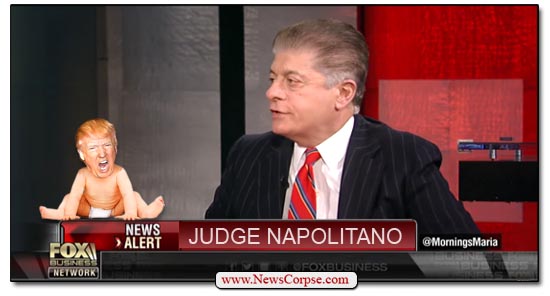 However, there were some revelatory moments that could expose Trump to some legal jeopardy if they are confirmed by other evidence or testimony. The risks for Trump were so apparent that even the senior judicial analyst on Fox News noticed. Andrew Napolitano was interviewed by Neil Cavuto after Cohen’s hearing (video below). His observations were decidedly unlike those that might be expected on Trump’s favorite propaganda network. He began by addressing the coordinated strategy of the committee’s Republicans to portray Cohen as an incorrigible liar. “If he’s that kind of a monster, Mr. President,” Napolitano asked, “why did you keep him around for ten years?”?

That’s a good question. He might also have pointed out that if lying was such an unforgivable sin, then how can the GOP continue to excuse Trump, whose documented record of lying has exceeded more than 8,000 falsehoods since he took office. But it was Napolitano’s legal analysis that really put Trump’s troubled future into perspective. He offered a brief synopsis of the legal peril that the President may soon find himself in. The upshot, according to Napolitano, is that in Cohen’s testimony “there’s at least four potential felonies” that Trump faces. Napolitano said that:

“[Cohen] paints a potentially grave picture for the president. If the conversation he says he overheard with Roger Stone is true, then the President lied under oath. Because the President swore to the accuracy of his answers to the written question from [special counsel] Bob Mueller, one of which was ‘Did you speak to Roger Stone about Julian Assange?’ Answer: ‘No’

“If what Michael Cohen says is true about the President meeting with the Russians in Trump Tower in June of 2016, then he lied under oath, because he told Bob Mueller he didn’t know about it.

“The payments by Donald Trump, signed while he was president, to Michael Cohen, showing a debt to Michael Cohen. The President swore in his financial statements filed with the Department of the Treasury, he didn’t have any debts with Michael Cohen. And two months after he swore to the accuracy of that he starts writing checks of $35,000 a month to Michael Cohen. That extends the conspiracy to defraud the Federal Election Commission of accurate campaign information into the President’s presidency.”?

If this were an analysis by a Democrat or a liberal pundit it wouldn’t be especially notable. But for the senior judicial analyst at Fox News to be pointing out these legal problems for Trump is rare and, from Trump’s perspective, worrisome. Not that Trump isn’t already worried. His incessant tweeting about “Witch Hunts” and his childish insults aimed at his critics is the obvious behavior of someone consumed by fear. In remarks Trump made about Cohen’s testimony from Hanoi, he reinforced that image of a cornered rat:

“He lied a lot, but it was very interesting, because he didn’t lie about one thing: He said no collusion with the Russian hoax.”?

Actually, Cohen never said that there was no collusion. He only said that he had no direct evidence of it, but that he had his suspicions. So Trump is still desperately trying to distort reality to fit his twisted version of it wherein he can be free of the frightening consequences of his unlawful acts. And if his precariousness legal status is so apparent to a Fox News analyst, then he truly does have something worry about.