On Wednesday morning the long anticipated testimony of Donald Trump’s former personal attorney, Michael Cohen, began before the House Oversight Committee. His prepared opening statement revealed that he intends to provide both testimony and documentary evidence that Trump is “a racist, con man, and cheat.” This has predictably triggered Trump who retweeted an absurd comment that did nothing but expose his flagrant fear of the truth. 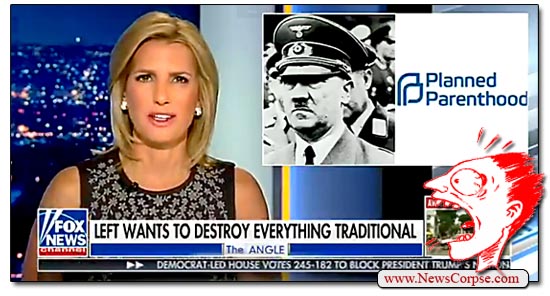 The fear of Cohen’s testimony has also infected Trump’s sycophantic defenders at State TV (aka Fox News). But their strategy for diverting attention away from the hearing has devolved into one of the most repulsive and dishonest series of accusations ever made, even by the low standards of the Trump era Republican Nationalist Party.

The onslaught began the night before the hearing with Fox’s primetime host, and devoted white supremacist, Laura Ingraham. In a segment that featured a chyron saying that the “Left Wants to Destroy Everything Traditional,” Ingraham practically drooled while asserting that “”Hitler, just like Planned Parenthood, practiced and defended mass extermination.”

So it’s Ingrahams’s position that individual women who choose to exercise their Constitutional rights regarding difficult health decisions are the equivalent of a murderous dictator who purposefully engaged in genocide? And this is the issue that Ingraham needed to raise on the eve of the Cohen testimony? Clearly her intent was to inflame a hostile fury among Fox’s viewers with the hopes of inciting an anger that would cloud their perspective of the pending hearing. And she wasn’t alone.

The following morning the “Curvy Couch” potatoes of Fox and Friends broached the very same topic with the help of Trump’s White House counsel, Kellyanne Conway. And even though the subject of the segment was spelled out in the chyron reading “Michael Cohen Testifies on Capital Hill Today,” Conway unleashed a searing assault on Democrats that was completely false and defamatory:

“[Democrats] are for infanticide. They are for late-term abortion, taxpayer funded abortion, mid-term pregnancy abortion, sex selection abortion – when you don’t want another daughter, fine – just find out the sex of the baby and then exterminate it. Guess what? Now they’re for post-birth abortion.”

On Fox News, @KellyannePolls falsely accuses Democrats of being "for infanticide."

"They're for post-birth abortion," she lies. pic.twitter.com/d61vhluQDJ

None of that is remotely true. However it is provocative and incendiary and intended to whip up a hysteria among the Deplorables watching Fox News that would shove aside any real discussion of the Cohen hearing. But these attempts to suppress any leakage of the news from the hearing only affirm just how terrified they are of the truth getting out. It’s a tactic that drips with fear. And it will work pretty well on Fox News viewers. Unfortunately for Trump, that is an ever-shrinking sector of the population.