The conservative manufactured controversy over Rep. Ilhan Omar’s remarks concerning Israel are continuing to be inflamed by Donald Trump’s State TV division, Fox News. The House of Representatives has already passed a resolution that condemns hate of all kinds – whether directed at Jews, Muslims, or anyone else – which all Democrats voted for, but which twenty-three Republicans voted against. 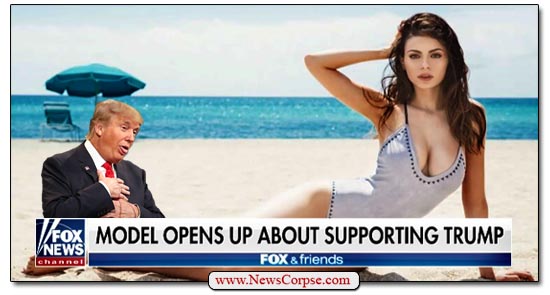 The determination by Republicans and Fox News now is to slander Democrats as as anti-Semitic. That’s an absurd stretch considering that Democrats have been the most supportive party of the generally progressive views of the majority of American Jews. At the same time, Republicans have been the welcoming home of neo-Nazis and racial hate groups who are often openly lobbied by GOP candidates, including Trump.

On Monday Trump lashed out incoherently (as usual) against Democrats, saying that they are “the anti-Israel party, the anti-Jewish Party.” Never mind that Jews having been voting Democratic in overwhelming majorities (70-80%) for decades. So naturally Fox News has had to come to Trump’s rescue by participating in a fraudulent campaign to pretend that Jews are suddenly unhappy as Democrats and are leaving for the Trump Republican Nationalist Party. To that end, Fox and Friends interviewed Elizabeth Pipko (video below), a former model enlisted as the spokesperson for a group called “Jexodus.” She began her contrivance by saying that:

“I thought it was time. Obviously we saw a lot of anti-Israel policies kinda start under the Obama administration. And it got worse and worse and it was blasted on our TV screens the last month. There is anti-Semitism in the Democratic Party. They can hide it, they can do whatever they want. They failed to condemn it and now it’s there. So it’s time.”

Of course, they did condemn it. But Trump was watching (as he always does) and tweeted the above quote. During the segment Pipko conceded that Jews have been generally supportive of Democrats. But she failed to grasp that the reason for that is that Democratic policies of inclusion and compassion and equality are aligned with those of most Jewish voters. And there is also a reason why neo-Nazi and racist groups have been loyal supporters of the GOP and Trump. But Pipko seemed oblivious to the fact that Jews were already satisfied with the political judgments they’ve made:

“I thought that people would at least understand – my Jewish friends of mine – would understand why I supported [Trump]. They didn’t at first, and they never changed their mind. They stuck to the narrative that President Trump is bad and they refused to change. […] I don’t think they’re going to change.”

Exactly. The choices made by Jewish voters were based on their knowledge of the political landscape with a full understanding of the issues important to them. Pipko, Fox News, and Trump seem to think they are too stupid to make a decision regarding their own best interests. So this phony front group was formed to pretend that there is a movement of disaffected Democratic Jews. Even though Pipko admitted that her own friends were still staunchly Democratic. It is reminiscent of “Blexit,” which falsely asserted that African-Americans were also abandoning the Democrats.

There is nothing genuine about this “Jexodus” nonsense, including the name. After all, “Exodus” was already about Jews involved in a mass departure. It hardly needs a “J” added to the front. But more importantly, it’s a totally fabricated crusade to demonize Democrats – especially the Jewish ones – for their independent thinking. Pipko is just another spokesmodel for the right-wing’s exclusionary dogma. And her otherwise irrelevant project would have been deservedly ignored but for the prejudiced intervention of Fox News and Donald Trump.