With his ratings in a steep downward spiral and advertisers rushing for the exits, the speculation surrounding Glenn Beck’s future at Fox News is reaching a fever pitch.

A few weeks ago David Carr of the New York Times reported that Fox insiders have begun “contemplating life without Mr. Beck.” More recently reports say that Joel Cheatwood, Fox’s dedicated executive nursemaid for Beck, is leaving Fox to join Beck’s production company Mercury Radio Arts. That’s perhaps the strongest indicator that the Beck program has no future at Fox. And now Brian Stelter of the New York Times says that Beck is considering launching his own cable channel.

Beck has called President Obama a racist. He has lectured on the socialist artwork hidden in Manhattan landmarks. He believes that radical Muslims are conspiring with American progressives and Google executives to reinstate a global Islamic caliphate. He has predicted Armageddon too many times to track. But now we finally have irrefutable confirmation that Glenn Beck is certifiably insane.

Where would Beck get the idea that he could anchor such a network? Not only is his popularity in freefall, but even at its height it wasn’t enough to support such a venture. For comparison consider Oprah Winfrey who recently launched a cable channel of her own. Oprah has an international fan base that dwarfs Beck’s. Her audience is much more advertiser-friendly. She has been a beloved American icon for decades. The notion that Beck could pull this off with a couple of million mostly geriatric Tea Baggers who would have troubling finding his new channel is ludicrous. 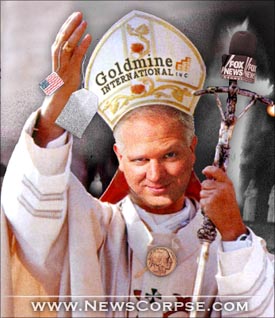 What sort of cable network would Beck produce? He certainly couldn’t persuade anyone that he could run a news network. So would he settle for an entertainment net with reruns of Touched By An Angel supplementing his daily sermons?

A far better option for Beck would be to embrace his inner televangelist. He has been preaching his demented gospel for some time now and wouldn’t have to change much from his current program. He could acquire a struggling religious cablecaster and install himself as Pope.

Another option would be an infomercial channel where his experience as a huckster would come in handy. And the advertisers that he has managed to hang on to are just the sort that would benefit from this style of programming. Gold coins, survivalist gear, and various medical and insurance products would be easy to peddle to his gullible disciples along side limited edition Tea Party serving sets and commemorative plates depicting America’s Apocalypse.

Ideally, he could combine the two to form the first ever “evange-mercial” channel. Imagine the possibilities of merging Beck’s smarmy Jimmy Swaggert impersonation with the marketing zing of a ShamWow prayer cloth. It’s a natural for Beck and we at News Corpse can’t wait to see him peddling the Lord’s swag on late night TV.

2 thoughts on “Glenn Beck Has A Bright Future – In Infomercials”