It’s never exactly breaking to news to report that Fox News has broadcast something that is blatantly contrary to reality. In fact, it would be easier to point out when they say something that’s even marginally true. Nevertheless, it’s important to set the record straight lest we allow their lies to linger and get a foothold on the weaker minds that populate their audience of Deplorables. 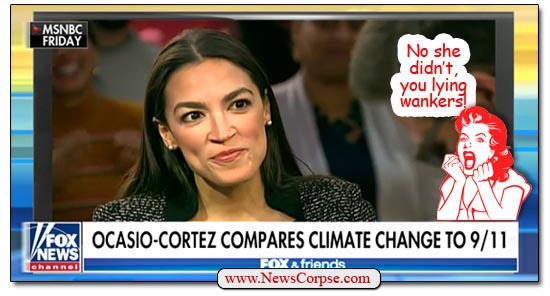 On Saturday morning, Donald Trump’s favorite breakfast club, Fox and Friends, put together a segment that was obviously intended to deceive. The target of their dishonesty was a familiar one: Democratic Rep. Alexandria Ocasio-Cortez (AOC), for whom they have developed a perverse obsession. The subject of the segment was emblazoned on their chyron which read “Ocasio-Cortez Compares Climate Change to 9/11.” There’s just one little problem with that. AOC never did anything of the kind.

The “Curvy Couch” potatoes began the segment with a clip (video below) of AOC making a point about the of the Trump administration’s utterly incompetent response to the tragic hurricane in Puerto Rico. She said that:

“On the events on September 11, 2001, thousands of Americans died in the largest terror attack on US soil. Our national response was war in one, then eventually two countries. Three thousand Americans died in Puerto Rico due to Hurricane Maria. Where is our response?”

So AOC did make some mention of 9/11, but it had nothing to do with climate change. And it wasn’t even a comparison to the devastating hurricane in Puerto Rico. She was only observing that this country can devote resources to a disaster when it has the will to do so. She was comparing the response, not the event. But the hosts of Fox and Friends were more committed to attacking AOC than to reporting what she actually said. Not that she didn’t address climate change in the hour long town hall she did with Chris Hayes of MSNBC. She did, and in a very profound and compelling manner. But Fox News never played that part:

“Our greatest existential threat is climate change. And to get us out of this situation – to revamp our economy, to create dignified jobs for working Americans, to guarantee healthcare, and elevate our educational opportunities and attainment – we will have to mobilize our entire economy around saving ourselves and taking care of this planet.”

The producers of this Fox program also appended a bit of video to the end of their clip that was unrelated to the rest of it. It showed her commenting about the critics of the “Green New Deal,” saying that she “didn’t expect them to make total fools of themselves.” That comment was actually a response to a video montage of Republicans and Fox News shills (which is redundant, I know) attacking her. And after maligning and misrepresenting her for the whole piece, the Fox hosts suggested that she should come on their show. Yeah, right. At least Fox didn’t compare her to Hitler and Stalin like it did a couple of months ago.