[BREAKING: April 1, 2011, New York, NY]
In recent weeks there has been growing speculation as to the future of Glenn Beck on Fox News. Several events seem to be foretelling an imminent severance between Fox and their resident End Times correspondent. For instance:

1) Beck’s ratings are in an unrelenting freefall. The latest quarterly numbers reveal that, compared to just one year ago, Beck has lost 30% of his total audience, and amongst viewers between the ages of 25-54 he’s dropped 37%. He was even bested by Rachel Maddow a couple of weeks ago.

4) When Beck was on vacation last month, Fox Business host Andrew Napolitano filled in for him and the ratings barely budged – a signal that Fox could replace Beck at any time without suffering any ill effects.

6) Seven radio stations have dropped Beck’s show this year (so far). This corroborates the weakness seen in his television ratings.

Apparently these facts are being taken very seriously in the Fox News executive suites. News Corpse has exclusively acquired a confidential memo that cryptically discusses the “WK Day 5pm” time period and lists potential hosts that are under consideration. 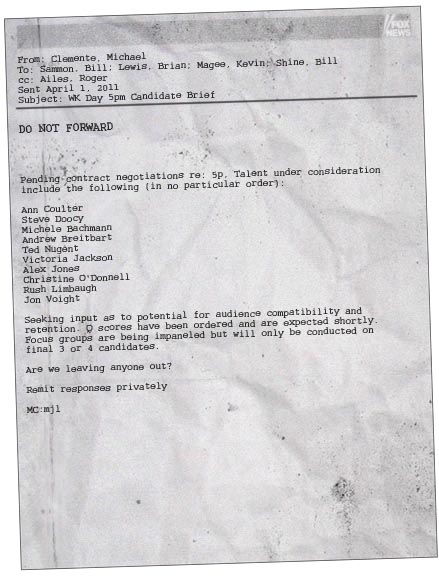 The document identifies ten notoriously conservative “candidates” that could conceivably fill Beck’s shoes. The list is duplicated below along with a brief appraisal of the candidate’s pros and cons.

This memo is the strongest evidence yet that Beck’s days are numbered. His contract expires at the end of the year, but there’s even money that he doesn’t even last that long. Perhaps this is what Beck is referring to when he warns of the Coming Insurrection. It isn’t so much a Perfect Storm that is threatening to engulf the world – just Beck’s world.