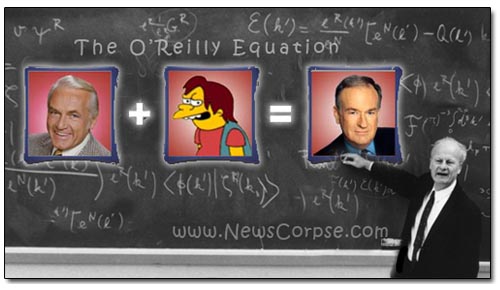 Researchers at Indiana University have published the results of a study that documents the intimidation and propagandizing employed by Fox News’ resident bully, Bill O’Reilly. The study, sub-titled, “Revisiting World War Propaganda Techniques,” finally paints an academically verified picture1 of O’Reilly’s repulsive modus operandi. Contrary to O’Reilly’s assertion that he doesn’t, “do personal attacks,” the IU study spells out the truth:

The IU researchers found that O’Reilly called a person or a group a derogatory name once every 6.8 seconds, on average, or nearly nine times every minute during the editorials that open his program each night. [See the Stalking Points Memos].

This may not seem like news, but we now have data that is backed up by the reputation of researchers from a respectable American university. While it may appear that O’Reilly is a cartoonish character, he is following the model of Father Charles Coughlin, the early 20th century American racist/fascist. There were probably those who thought Coughlin was cartoonish at the time. And like Coughlin, O’Reilly does have a huge audience of blind ducklings that take his word as gospel. The lesson we must learn is that this sort of evil cannot be ignored.

O’Reilly is man that cannot say the word “left” without appending modifiers like “far,” “ultra,” “committed,” or “looney.” He is a man who is convinced that every critic is a “smear merchant.” And his opponents are never merely disagreeing with him, they are “vile.”

While the researchers never overtly associate O’Reilly with the work of his propagandisitc predecessors (i.e. Goebbels, Coughlin), they do point out some more subtle connections. The study itemized seven propaganda devices as defined by the Institute for Propaganda Analysis. O’Reilly was found to have employed six of them nearly 13 times each minute:

Sound familiar? Every now and then, an academic institution will conduct an exercise in the obvious. It would not take much in the way of intuition to have predicted the results of this study, but it is still useful to have compiled an accurate and scholarly paper on the subject to wave in the face of skeptics, not that O’Reilly’s minions will pay much mind. They will likely respond with the indignation of Stephen Colbert and proclaim that they don’t care much for “book-learnin.” And we know, because Colbert has told us, that the truth has a well known liberal bias.

[1] I have also painted a picture of O’Reilly’s repulsive modus operandi. Actually, it is an interactive artwork that documents O’Reilly’s attempts to demean and belittle his perceived enemies. Unfortunately, the piece is a day or two from completion. I was surprised that this study from IU was released so close to my completion of this artwork. Coincidence? I’ll have the artwork posted by Saturday. It’s posted now: Bill O’Reilly: Propaganda Pimp

Update: O’Reilly has responded to the IU study with a Talking Points memo dripping in sarcasm. And while he continues to slam George Soros and Media Matters (who masterfully debunk his nonsense), he doesn’t make a single coherent argument to counter the conclusions of the research. He does, however, accuse the university of being in Soros’ pocket along with the rest of the left-wing cabal that he fears is aligned against him.

Update II: Rosa Brooks wrote an Op-Ed for the L. A. Times about the IU study. So of course O’Reilly whines that he is being attacked by the far-left media. Then, after the Times publishes a rebuttal to Brooks written by a Factor producer, O’Reilly whines some more because the rebuttal was only published online. Sheesh. The Times then explains in its publishing policy.