A few days ago President Obama announced to the nation that Osama Bin Laden had been killed in a raid on his compound in Pakistan. Rather than congratulating the administration for having achieved a goal that had evaded the previous administration for seven years, the GOP went on the attack accusing Obama of everything from conducting the mission for political gain to making up the whole thing. Some critics even alleged that Obama had opposed the mission and the military acted in defiance of his orders which, of course, would be a treasonous act punishable by death.

It’s clear that the President’s opponents are simply unwilling to grant him the slightest bit of praise no matter what he does. They are there only to viciously attack him. These are the same people who ridiculed America’s leader being awarded the Nobel Peace Prize, and who celebrated when the U.S. was not awarded the prestige and economic benefit of the Olympic Games. They take pleasure in seeing the country embarrassed or harmed so long as they can blame it on Obama.

Conversely, they have a severely abnormal obsession with assigning credit to George W. Bush for things he wasn’t remotely involved in. With regard to Bin Laden, Bush famously said that “I don’t know where Bin Laden is. I have no idea and really don’t care. It’s not that important.”

Nevertheless, the right is trying mightily to persuade their feeble-minded flock that it was Bush who brought Bin Laden to justice and that Obama was a mere bit player, or worse, an obstacle. This isn’t anything new. Here are a couple of examples of revisionist right-wingisms as envisioned by Fox News: 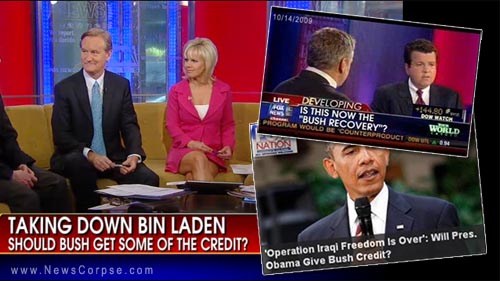 So while Bush and his cronies drove the nation into the worst economic decline in decades, Fox tried to credit Bush for the recovery that Obama presided over. And when Obama executed his policy to draw down our engagement in Iraq, Fox tried to give Bush credit for that as well. In short, if something bad happens it doesn’t matter how early in his term it is, Obama is the owner and the cause of it. If something good happens it wouldn’t matter if it were the last days of his second term, he is merely a lucky bystander.

This sort of cynical dishonesty would be bad enough if partaken by a partisan politician or pundit, but when it is presented by a so-called “news” organization as fair and balanced reporting it escalates to obscenity. It is proof that when Rush Limbaugh said that he hopes the President (and therefore the country) fails, he meant it, and many of his ideological comrades are feverishly hoping the same thing.

4 thoughts on “Fox News Gives Bush Credit For . . . Everything”