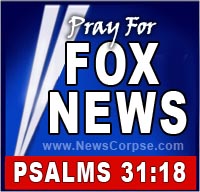 With his latest prediction of Armageddon behind him, Judgment Day Preacher Harold Camping is looking forward to his new position at Fox News as a politics and religion commentator. The announcement of this addition to Fox’s roster of pundits came this morning from Fox Vice President and Washington managing editor Bill Sammon:

Sammon: We are pleased to begin what we believe will be a long and fruitful relationship with this distinguished observer of American culture, religion and society. Harold has a keen insight into current affairs and a connection to America’s faith-based community. He also has a predictive track record that fits squarely with the team at Fox News.

Sammon is quite correct in that assessment of Camping’s history of forecasting. He is at least as accurate as the stars on the network. For instance:

A couple of weeks ago a study was released that showed that most pundits are only right in their prognostications about 50% of the time. The numbers were even worse for conservative pundits who, according to the researchers, were wrong more often than liberals.

Camping, a popular Christian radio broadcaster, could flow smoothly into Fox’s lineup. He shares most of the editorial slant favored by the network’s veterans. When reached for comment he said…

“What? Fox News? Oh yeah. Me and Roger [Ailes, CEO of Fox News] had lunch and discussed the return of Jesus. The world is ending, you know? What date is it? Could someone shut the window?”

That’s why Camping should fit right in with the rest of Fox’s commentators. There is certainly nothing in his past that would indicate that he would lower Fox’s average for accurate forecasting. He might even be a good replacement for the departing Glenn Beck. His areas of interest (politics, morality, the end of all human existence) match closely Beck’s favorite subject matter. In fact, with a little make up, Beck’s audience may not even be able to tell the difference.