Yesterday marked the end of a bad week on Wall Street. The market declined all of 2.3% for the week. So if you haven’t already escaped to your bunker in Idaho you may want to pack up the kids, the rations, and the gold coins, and hit the road.

As usual, the prophet of the financial End Times is Fox News’ Neil Cavuto. He is to business what Glenn Beck is to…well, everything else. Cavuto spent the opening minutes of his program on Fox News insisting that America was in a state of deep decline and that no recovery has occurred, or will occur. He later shuttled over to his program on Fox Business Network to announce that the economy had “flatlined.”

Does he mean this economy? 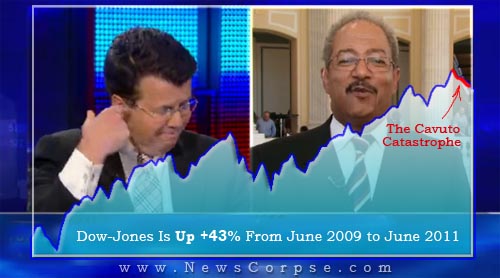 A truly fair and balanced analysis of the situation would recognize that there has been a substantial move to the upside since President Obama was inaugurated. Over the past two years there has been a 43% increase. Compare that to the two years prior, during the Bush administration, that saw a 36% falloff.

The primary argument Cavuto is making for the catastrophe he perceives is that the market has been negative for 5 straight weeks. Of course, knowledgeable analysts never draw conclusions from such short periods of time. The chart above demonstrates why that is not considered wise practice. What Cavuto is spinning as a catastrophe is really a mere 5% drop over a long trend of gains.

This is nothing new for Cavuto or Fox News. They consistently hammer on any negative market activity while ignoring the positive. If the market goes down it is because of the looming Obama depression. If it goes up Fox labels it a bear market rally. Fox is so determined to deny Obama credit for anything positive that they once went so far as to claim that the Tea Party was responsible for market a rally – and that was a rally that began weeks before the Tea Party existed.

Later in the program Cavuto engaged in what he regards as a debate, but is really just him interrupting his guest after every four words. Democratic congressman Chaka Fattah put up a valiant fight to present the facts about the employment statistics that show significant increases over the past couple of years despite recent weakness. But Cavuto would have none of it, cutting off Fattah repeatedly to spin the data as negatively as possible while treating his guest with overt rudeness. Seriously…no Democrat should ever go on that show or that network.

The Fox News financial reporting has been nothing but atrocious, They have been predicting disaster since January of 2009. Anyone who took their analysis seriously missed one of the strongest periods of growth in this nation’s history. I sure hope nobody is taking them seriously now.