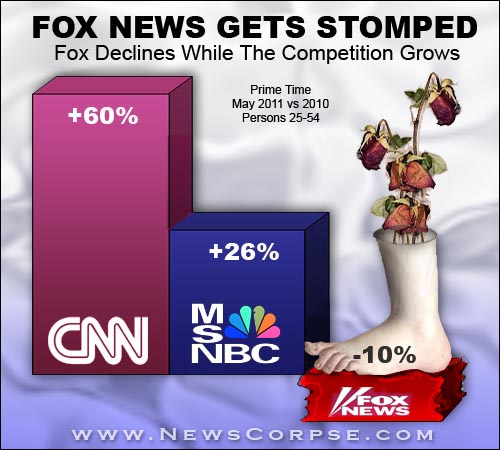 The recent May ratings data revealed the weakness of Fox News, particularly when compared to their competitors. But Fox is also getting whipped by an old adversary about whom their CEO, Roger Ailes, once said…

That attack on Jon Stewart came right after Ailes said of the folks at NPR that “They are, of course, Nazis.” And who can forget Bill O’Reilly dismissing Stewart’s audience as a bunch of “stoned slackers.”

Well, Stewart is getting the last laugh. His program on Comedy Central averaged 2.3 million total viewers this May and was 19% higher than May of 2010. The Fox News primetime lineup for May averaged only 1.85 million viewers and declined by 10%. In fact, Stewart beat every program on Fox in total viewers except for Bill O’Reilly. However, projections for demographic breaks of 25-54 and 18-49 suggest that Stewart beat even O’Reilly, likely delivering twice as many demo viewers as O’Reilly.

Jason Easley at PoliticusUSA provides additional detail as well as the observation that Stewart’s victory was achieved in the late night time period against Fox programs that air in primetime.

“This is why Fox News both hates and fears Jon Stewart. Not only is he more popular than they are, but he devotes much of his program to exposing the biased reporting of FNC. […] He is literally teaching his audience, which is bigger than FNC’s, how to see through the partisan propaganda that Rupert Murdoch has based his network on.”

The May ratings book also noted that MSNBC is the number one cable news network among 18-34 year-olds. This reinforces the growing conclusion that the next generation of television news consumers is rejecting the Fox News model of a hyperbolic, sensationalized, rabidly partisan, lie factory. Young viewers are clearly more discriminating, more intelligent, and more open to diverse news sources. That is a formula that can only contribute to Fox’s problems as they continue to lose market share.

Fox is a network that relies on a closed loop of information and opinion to keep their audience ignorant and obedient. They can circulate their disciples amongst their own programs, talk radio, and a few sanctioned web sites, but they cannot tolerate free-thinking individuals. The young viewers who made MSNBC first in the category, and those who watch the Daily Show, can’t be fooled into attending Tea Parties or believing that the president is socialist Muslim from Kenya. So the more impact programs like the Daily Show have on illuminating the inanities and hypocrisies of the media, the better for our society, our country, and our world.