The downward spiral into which Donald Trump is descending may finally be beginning to sink in, not just to Trump, but to the right-wing media propagandists who are struggling to shore up his sickly presidency. With each day there is news that contributes to the terminal prognosis of Trump’s floundering reelection campaign. And the accumulating sense of doom has become impossible to ignore.

Trump himself is well aware of the dilemma he faces as every national poll shows him getting crushed by Joe Biden. Even worse, polls of the seven most crucial swing states (Wisconsin, Florida, Michigan, Pennsylvania, North Carolina, Arizona, and Minnesota) are also showing Biden leading. So Trump has fallen back on his customary dismissal of the media and the independent firms they hire to conduct their surveys:

Sorry to inform the Do Nothing Democrats, but I am getting VERY GOOD internal Polling Numbers. Just like 2016, the @nytimes Polls are Fake! The @FoxNews Polls are a JOKE! Do you think they will apologize to me & their subscribers AGAIN when I WIN? People want LAW, ORDER & SAFETY!

Trump is certainly “sorry,” but not for the reasons he states. He’s a sorry excuse for a leader who resorts to petulant whining whenever he doesn’t get his way. And he’s surely sorry that everyone from the New York Times to Fox News is reporting how thoroughly the American people have rejected him. Even his favorite pollster, the rabidly biased Rasmussen, has Trump’s approval rating at 42%, matching lows as far back as January of 2018.

These numbers have Trump repeating his oft-mentioned lie that he has 95% approval within the Republican Party. Not only is that untrue, it’s irrelevant. He is not the president of the GOP. What’s more, Republicans represent a measly 28% of the electorate. Which is hardly enough to secure a victory in November.

The conditions for Trump’s campaign have deteriorated so badly that close associates are speculating as to whether he might drop out of the race entirely rather than suffer defeat. Politico is reporting the prospect of Trump’s renowned cowardice, along with comments from insiders who say that…

“The president has privately come to that grim realization in recent days, multiple people close to him told POLITICO, amid a mountain of bad polling and warnings from some of his staunchest allies that he’s on course to be a one-term president.”

And as if that weren’t bad enough, Fox News is joining those with suspicions of Trump running away from an expected rout. Fox host Trace Gallagher prefaced a question to Trump surrogate John Sununu (video below) saying that “President Trump’s poll numbers declining in recent weeks […] is leading some speculation that if his support keeps falling, the president might drop out of the race.” And Fox News featured a graphic during the segment that warned of a “rough polling stetch” (sic) for Trump. 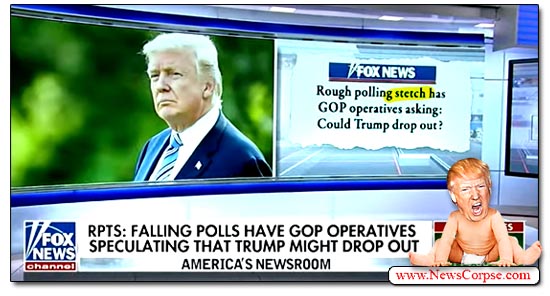 Whether there is any chance of Trump bailing is an open question. He has a reputation as a coward who flees from any trouble that confronts him. But he also has a stubborn streak and a massive ego that can overwhelm his fears. In the end it makes no difference because either outcome would be similarly humiliating for Trump. His malignant narcissism prevents him from accepting that he is less than the manifestation of perfection. And that will result in his eventual downfall being all the more debilitating when it comes to pass.

One thought on “UH-OH: Fox News Speculates that Trump is a Loser Who Might Drop Out of the Race”