Saturday Night Live may be on hiatus, but comedy is alive and well and, unfortunately, emanating from the alleged president of the United States. As Donald Trump’s prospects for the future wither pitifully into ashes, his attempts to boost his spirits and public image are taking on more of the characteristics of Borat movie.

We now have a Republican “president” whose dreadful approval rating and polling stats have Fox News speculating that he might drop out of the race. And in what may be one of the most nauseating abdications of duty for any American president, Donald Trump is asserting ignorance as a defense. He is claiming that he was never briefed that Russia paid bounties to Taliban militants to kill American soldiers. If it’s true that he wasn’t briefed (doubtful), Trump is accusing his own intelligence agencies of purposefully keeping him in the dark about a critical national security matter. In which case, you have to wonder if they had a good reason (probable).

That’s the kind of ludicrous justification that generally occurs when someone has totally lost control of their senses. Which may not be as far fetched as one might think: “According to White House and intelligence officials […] the President himself posed a danger to the national security of the United States [and that] the President was often ‘delusional,'” That would explain so much. Like his tweet of supporters chanting “white power.” Or his embrace of TV ratings as “the real polls” because every legitimate poll shows him trailing Joe Biden. Or his insistence that testing for the coronavirus causes more cases of it.

Contributing to the cavalcade of cretinous comedy is the Trump campaign’s outreach to supporters via email. Somehow, News Corpse was added to Trump’s email list. And what he is sending out could not be made more hysterical if The Onion had composed it (see the email below).

The letter begins with Trump bragging about imaginary accomplishments secured despite “unprecedented obstruction from Democrats and constant lies from the fake news media.” As usual, Trump enters into every dialogue by demonstrating his inherent weakness. For the so-called “leader of the free world,” Trump sure makes a habit of whining about all of the forces aligned against him. Even though those forces are, in his estimation, ineffectual. So why bother whining?

The “accomplishments” Trump enumerates are all figments of his diseased imagination. He leads off with what he calls “Tax cuts for middle-class Americans,” but which every credible economist has more accurately described as a handout to corporations and the wealthy.

Next Trump boasts about “Demolishing ISIS,” which anyone who has even casually scanned the headlines knows is blatantly false.

So Trump proceeds to his frequent lie about “Construction on the wall” along the Southern border. In fact, there has been zero construction of any new wall. But Trump has wasted billions of dollars on repairs and phony PR boondoggles.

Trump followed that up with a claim of “Record fundraising from grassroots supporters.” Okay, let’s give him that one. It just means that the alleged billionaire has soaked his cult followers for hundreds of millions of dollars, despite once saying he would self-finance his campaigns. Then he spends that money paying himself for events at his own hotels and golf resorts.

Finally, Trump touts what he says is “A booming economy.” Really? The nation is currently in a recession. 30,000,000 people are unemployed. There are record numbers of bankruptcies and massive layoffs. The national debt is at historic highs. The Federal Reserve is recklessly printing trillions of dollars to prop up the stock market, which is overvalued and headed for a crash.

It’s notable that Trump’s self-glorifying email of bogus accomplishments made no mention of the coronavirus pandemic. Presumably because it would be hard for even Trump to spin 127,000 dead, and still surging infections and fatalities, into an accomplishment.

Trump closed his email with a poll of his own. He asked: “How would you rate President Trump’s job performance?” The answers he provided are “Great, Good, Okay,” or “Other.” He literally stole that joke from Stephen Colbert, who on his old Colbert Report used to ask guests if George W. Bush was “a great president” or “the greatest president.” The problem is that Trump is not joking. He truly believes that his supporters are stupid enough to fall for this farce.

Rest assured that the results of this poll will never be published. But Trump will announce that he is the most beloved president of all time. Never mind that real polls on his job performance are abysmally low. Even his favorite pollster, the rabidly biased Rasmussen, has him at only 43%. That doesn’t stop Trump from repeatedly claiming that he has 95% approval within the Republican Party. But even that is evidence of his deranged grasp of reality.

Trump’s campaign is dead in the water, and there is plenty of proof that he knows it. What’s more, his Republican confederates are beginning to understand just how big a detriment he is to their future. And when they finally flee his sinking ship (like the rats they are), there will be nothing left to keep Trump afloat. 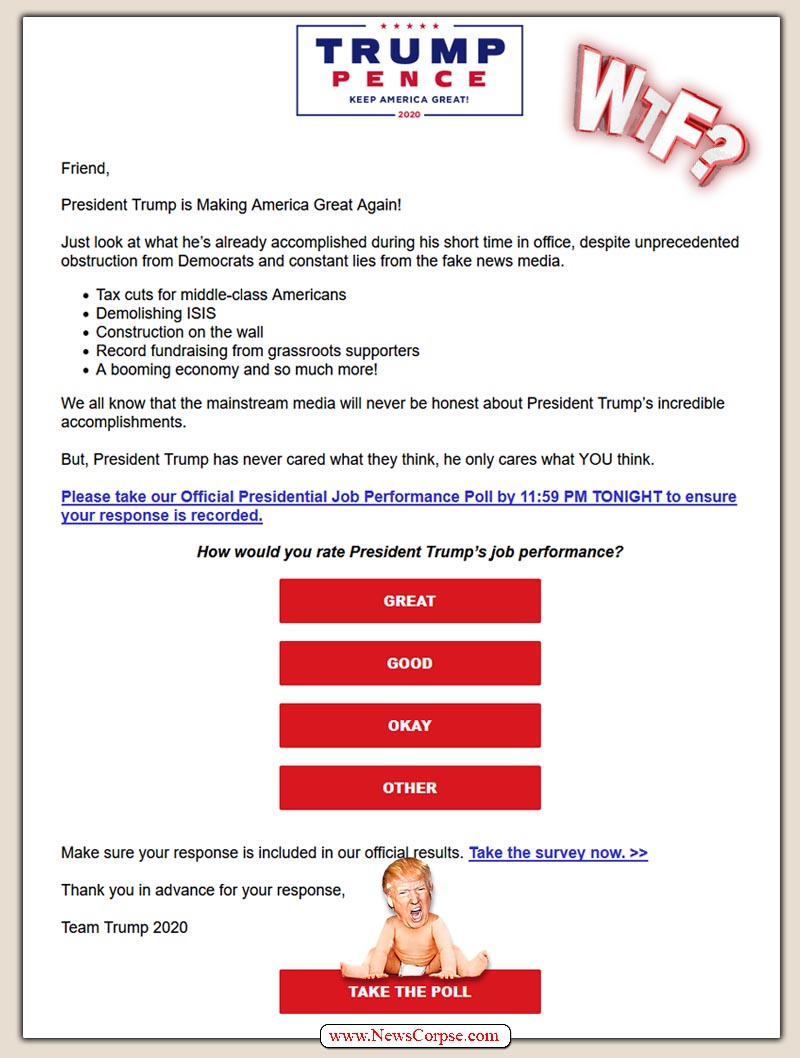