The Fox News Channel has long been the mouthpiece for an extremist right-wing agenda and the most radical fringes of the Republican Party. It’s what it was created to do by its founders Rupert Murdoch (an ultra-conservative media baron) and Roger Ailes (a GOP media consultant). And they have vigorously pursued their mission to distort the news and deceive their eagerly misled viewers. 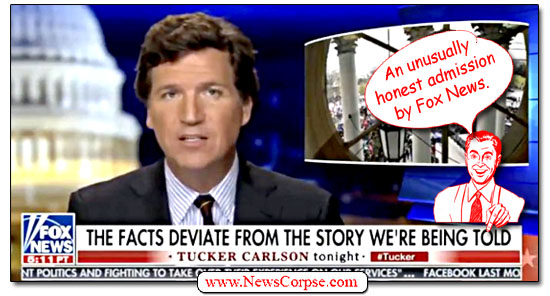 Over the years there has been a parade of lying charlatans on the network who shamelessly spread blatant disinformation and propaganda. They included such nefarious luminaries as Bill O’Reilly, Glenn Beck, Megyn Kelly, the recently terminated Lou Dobbs, and of course, the veteran of venality, Sean Hannity.

With such a stellar cast of cretins it’s hard to imagine that anyone else could sink below that roster and achieve new depths of disgust. But there is one Fox News stalwart who is unafraid of the formidable competition and is willing to debase himself sufficiently to descend to unprecedented new lows.

Tucker Carlson is undoubtedly Fox’s new leader in political lechery. He has earned this dishonor over many years of fashioning diatribes filled with flagrant falsehoods and hate speech. However, his most recent rants are testaments to his determination to reign as the Fox News GOAT (Grossest Of All Time). Just this week Carlson has unleashed these nauseating tirades:

Coronavirus Vaccines Are a Plot by the Left to Suppress Free Speech and Even Freedom Overall
Wherein Carlson asks a bunch of question about vaccines for which the answers are readily available, but because he’s too stupid to look them up, he insists they don’t exist and everyone is lying about it. The truth is that Carlson lied about virtually everything in this tirade. And his lies are going to get people killed by dissuading them from getting vaccinated. Media Matters answered his questions for him here:

Tucker Carlson's questions were actually really easy to answer if he would have tried. pic.twitter.com/SGhKeLGlNl

George Floyd Died of a Drug Overdose, not the Cop’s Knee on His Throat for Eight Minutes
Wherein Carlson tries to divert attention from Trump’s historic second impeachment hearing in the Senate by bashing Black Lives Matter and making excuses for murderous cops. Which is a pretty wild diversion. And once again, according to Carlson everyone else is lying when it’s really just Carlson. He falsely asserts that George Floyd didn’t die of asphyxiation from having a cop’s knee on his throat for more than eight minutes. Carlson says he died of a drug overdose, like all Black “criminals” who defy authority.

This is infowars shit, just a completely batshit conspiracy theory blasted into your meemaws face pic.twitter.com/pjHzzeo5At

Here’s the truth: The Hennepin County medical examiner ruled Floyd’s death a homicide due to “cardiopulmonary arrest complicating law enforcement subdual, restraint, and neck compression.” Also, an independent autopsy determined Floyd died of “asphyxia from sustained pressure” on his neck and back that led to “impeded blood flow to the brain.” The report concluded that “Floyd has no underlying medical condition that would have contributed to his death.”

Defending Your Right To Believe That Democrats Eat Babies
Wherein Carlson’s segment sported a graphic that read “DEMS ARE TRYING TO CONTROL WHAT YOU BELIEVE,” although he never presented a single example of that. He began his demented dissertation on the dangers of censorship by sarcastically pronouncing that “The real threat is a forbidden idea, it’s something called QAnon.” This was his lead-in to a full-throated support for the crackpot conspiracy theorists.

Fomenting Civil War With Insanely Paranoid Lies
Wherein Carlson claims that Democrats are mounting a literal war against Republicans, with soldiers and everything. No, really. He actually said that Democrats “declared war on their rival political party. Not, by the way, a metaphorical war, but an actual one, with soldiers, paramilitary law enforcement, and the world’s most powerful intelligence agencies.”

This list could go on and on. But the point is made that Carlson is now the undisputed King of Crackpottery. And an especially dangerous brand of it. He is inciting violence with frightening tales of cannibalistic, freedom-hating Democrats. He is exacerbating the worst public health crisis in a century by maligning efforts to impede the COVID pandemic. He is stirring up his white supremacist audience to ever more noxious states of bigotry. And he is doing all of this tangible harm from his perch on Fox News where his ratings are higher than Hannity’s. Although the network suffered a sharp decline after the November election and is currently in third place behind CNN and MSNBC.

Fox News lawyers actually argued successfully in court that Carlson cannot not be held liable for the lies he tells because he “cannot be understood to have been stating facts,” and that “given Mr. Carlson’s reputation, any reasonable viewer ‘arrive[s] with an appropriate amount of skepticism’ about the statements he makes.” In other words, no reasonable viewer would believe Carlson’s BS. That’s according to the Fox News lawyers speaking on Carlson’s behalf.

The problem is that Carlson doesn’t have any reasonable viewers. So the cult disciples he’s disinforming on a nightly basis will blindly buy into whatever he says. And for that reason he’s earned the Fox News A-Hole of All Time Award. It’s an award that ought to be accompanied by a rapid cancelation so as to prevent any further harm to the nation. Sadly, Fox News is more likely to give him a raise and another hour to spew his bullcrap. Consequently, It might be more productive to do this: Un-Fox My Cable Box For more info on that, read this.