The political prejudices of Fox News are getting tested by current events that put the right-wing “news” network in a decidedly uncomfortable position. It was revealed last month that Republican representative Matt Gaetz (Q-FL) is under investigation by the Department of Justice for serious felonies including sex trafficking of a minor, prostitution, drug use, and financial corruption. 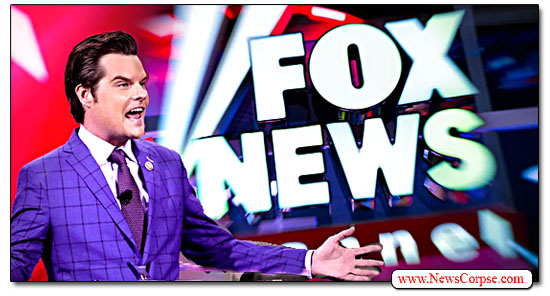 As a result of these charges, Fox News has had to adapt their ordinarily knee-jerk, pro-GOP editorial mission to keep from awkwardly aligning itself with the perversion and criminality for which Gaetz is accused. Never mind that Fox News didn’t have any trouble aligning itself with such criminality when it was committed by the serial sexual predator, Donald Trump. Gaetz isn’t Trump and doesn’t get the same measure of absolution from the Trump Ministry of Propaganda.

On March 30, 2021, Gaetz was interviewed on Fox News by Tucker Carlson. The entire segment was provided as an opportunity for Gaetz to defend himself from the allegations against him. Fox’s participation in this self-serving dialogue is hardly unexpected considering the network’s affinity for Gaetz as one of Trump’s most zealous supporters among Republicans in Congress. But even at the conclusion of that interview, Carlson exclaimed that it was “one of the weirdest interviews I’ve ever conducted.” And it would be hard to disagree.

However, that interview with Carlson was also the last time that Gaetz has appeared on Fox News, or even been the subject of any sympathetic stories. That was three weeks ago. This is the network that has shamelessly defended Derek Chauvin, Roger Stone, Paul Manafort, Capitol insurrectionists, the Confederate flag, QAnon, Alex Jones, and Vladimir Putin, to name a few. But they now appear to be reluctant to defend Gaetz. That says something about the depth of the muck that Gaetz is wallowing in.

Gaetz’s GOP colleagues in Congress are equally afraid to be associated with him. Only a couple of his closest friends in the House – Jim Jordan and Marjorie Taylor Greene – have bothered to stick up for him. Even Trump offered tepid support. It remains to be seen if the Fox News blackout will continue for any length of time. But the fact that they have snubbed him in this, his hour of need, is a significant rejection that has to hurt. Especially when everyone else that would be considered an ally has been running for the hills.