President Biden’s quiet competence and managerial success is befuddling his critics among the press and partisan Republican politicians. Consequently, they continue to have so little to do that they are making up pseudo-controversies to pass the time. It’s really pretty pathetic. 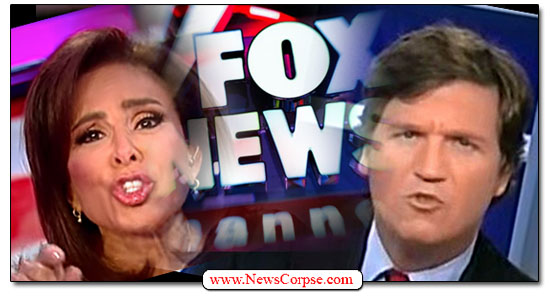 Their desperation has lead to tawdry displays of hostility related to relative trivialities. If they aren’t “canceling” their former Big Business allies, they are whining that Biden is neglecting such vital presidential duties as tweeting and yakking with cable news bootlickers.

Speaking of cable news bootlickers, the variety that has been polishing Donald Trump’s Tecovas, Fox News, is presently aghast at the thought of Democrats exploring the possibility of expanding the Supreme Court. A bill just introduced in the House suggests an increase from nine to thirteen justices.

There are plenty of rational arguments pro and con for this initiative but, somehow, the blowhards on Fox News evaded anything remotely resembling rationality. Tucker Carlson invited his Fox colleague “Judge” Jeanine Pirro on his program to mangle the issue beyond recognition (video below). The segment established with certainty that neither have any idea what the Supreme Court is. Pirro began by ranting that…

“This will change the United States dramatically. The left will have the ability to have in court – which is essentially nothing more than a legislative leaning body – that will approve of all of the issues that they are trying to make across the board in the United States. We will no longer have a Supreme Court that is based on the number of justices depending on who the president is. And it will all be leaning toward the person who is in office and who has the power. This is madness! It’s madness! As if the country isn’t lost enough.”

It truly is madness that Pirro thinks the Supreme Court isn’t already – and always has been – an institution significantly influenced by politics. That’s by design. The Constitution gave the power to nominate justices to the president and the responsibility of confirmation to the Senate. Both of which are political entities. However, she goes way too far to insist that the Court is just a legislative body. It absolutely is not. It has no power to draft legislation. It’s role is to ascertain whether laws, or specific applications of them, are consistent with congressional intent and the Constitution.

Pirro further misses the mark by claiming that an expanded Court unfairly serves one side of the political divide. In fact, it would be less likely to because there would be more diversity of opinion. Although the Court would still, contrary to Pirro’s musings, be made up of justices appointed by whoever is president. Where on Earth does she get the notion that that would change?

For his part, Carlson agrees with Pirro’s badly warped misinterpretations. He accuses Democratic proponents of expansion of saying “No more pretense. It’s purely a political body that rubber stamps our agenda.” And that’s different than the current Court, how? He claimed that an expanded Court would no longer be impartial, or be viewed that way. By whom? If he isn’t aware that the current justices aren’t already viewed as beholden to the political ideologies of the presidents who appointed them, he must be near comatose. Which leads to Pirro’s elaboration on her prior comments saying that “the people who are in power…”

“…are determined to make sure that their agenda is passed because you’ve got the president, and you’ve got the Congress, and now you’ve got the Supreme Court. […] We will lose our respect for that court as nothing more than a political legislative body. An imprimatur, if you will, for the Democrats.”

Really? And what does she think the present Court is “an imprimatur” for? She must know that Justice Gorsuch was only confirmed because Republicans in the Senate refused to consider an Obama nominee (Merrick Garland) for a year in order to give that nomination to the next president who they hoped would be a Republican (It was worse. It was Donald Trump). She must also know that Justice Kavanaugh was rammed through the Senate despite credible allegations that he was a boozing, sexual predator. She must also know that Justice Barrett was confirmed even though the opening she filled became available shortly before an election, which was the reason Republicans gave for not confirming Garland. Does she think that the present Court is well respected by most Americans? Carlson doesn’t think so. He closed the segment by lamenting that Democrats…

“…don’t care what you think. Which is not the way we think of democracy. In a democracy our leaders care what we think, by definition.”

If acting in a manner consistent with what the people want is how you show that you care what people think, then Carlson should be supporting the broadly popular President Biden. He should have supported the COVID relief and stimulus bill. He should be supporting the jobs and infrastructure bill. And he shouldn’t be feigning outrage over a proposal to expand the Court simply because Democrats – who the people elected – would have the first shot at nominating the new justices.

It is Carlson and Pirro who are the ones abandoning any pretense of impartiality in favor of being purely political. And they are doing it in such a way as to demonstrate their ignorance of democracy and the role of the Supreme Court. But would you expect any less of them, or of anyone else at Fox News?