The state of the media suffered “bigly” during the years that Donald Trump occupied the White House. He hated the concept of free press, repeatedly calling it “the enemy of the people,” and berating and insulting reporters. It was his mission to sow discord. And it was one of the few things that he was good at. At least with regard to his worshipful cult followers.

Trump actually admitted to Leslie Stahl that he purposefully foments distrust of the media. She asked him why he attacks the press. “You know why I do it?” he replied. “I do it to discredit you all, and demean you all, so when you write negative stories about me no one will believe you.”

Wow. Lesley Stahl, speaking at the Deadline Club Awards, says she once asked Trump why he continues to relentlessly attack the press.

His answer: “I do it to discredit you all and demean you all so that when you write negative stories about me, no one will believe you." pic.twitter.com/YVvDTD0Pm9

“The United States ranks last in media trust — at 29% — among 92,000 news consumers surveyed in 46 countries. […] One explanation, though not necessarily the only one, is the extreme political polarization in the U.S. This study, like many others, found extremely high levels of distrust — 75% of those who identify as being on the right thought coverage of their views is unfair.”

So it was the deliberate slander of the press by Trump and his conservative mouthpieces at Fox News and elsewhere that produced this humiliating result for the U.S. And no one should be surprised to learn that it’s still going on. Fox News contributor Joe Concha wrote an op-ed for The Hill that brazenly misrepresented the Reuters study:

“The U.S. media is the least trustworthy in the world, according to a comprehensive new Reuters Institute survey encompassing 46 countries. Yes, you read that right. The country with among the most resources in this arena – human, technical and otherwise – finished dead last. Finland ranked the highest, with a 65 percent trust rating. In Kenya, the trust rating clocked in at 61 percent. But here in the U.S.A., the home of global media giants including the New York Times, Washington Post and CNN, we’re trusted by a whopping 29 percent of those reading and watching.’

Notice what Concha left out? The primary cause of distrust in the media, his employer Fox News. Concha’s article went on to cite stories about Trump’s collusion with Russia an example of why the media isn’t trusted. He falsely claimed that “the Mueller Report didn’t find proof” when it actually did. Concha also maligned CNN and MSNBC reporters, saying that “they’re patently partisan opinion hosts” who “share their feelings, their opinions” and that they “pass it off as objective news reporting.” Which, of course, is what Fox News does 24/7, and what Concha is doing in this op-ed.

Digging deeper into the Reuters study confirms that Fox News is the main offender. When the survey results were broken down by media brand, Fox News had the distinction of being the most distrusted at 46% and only 35% trusted. That coincides with Trump’s most zealous base of support. Meanwhile, the most frequent media targets of Trump’s animus (NBC/MSNBC, CNN, the New York Times, and the Washington Post) all placed higher than Fox by 8 to 11 points. 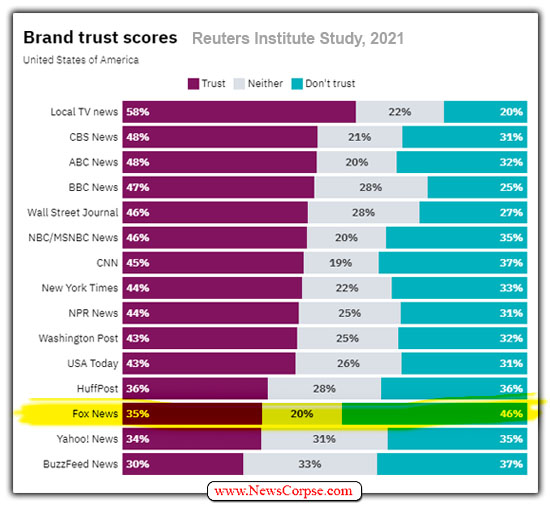 The fact that Fox News would so flagrantly misrepresent this information is typical of their dishonesty and bias. This week Fox also misrepresented the ratings for cable news networks. They reported on the ratings decline of CNN and MSNBC, attributing it, without evidence, to a “credibility problem.” But for some reason Fox’s article never mentioned Fox News ratings at all, or the fact that they had declines that were just as bad and, more often than not, worse.

So in less than a week Fox News blatantly lied twice (at least) about how they are received in the media marketplace. And they are doing it deliberately with the intention to deceive. Which is no less than what should be expected of a “news” network that lies about everything else all day, every day. That’s just how Fox News rolls.

One thought on “U.S. Finishes Dead Last for Media Trust Among 46 Countries, and Fox News Lies About It”