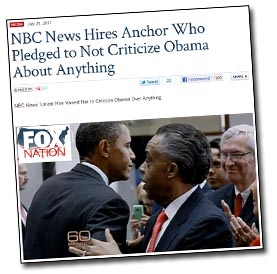 In the latest episode of Fox Nation’s departure from reality, the Fox Nationalists have jumped on remarks by Al Sharpton that suggest he intends to refrain from ever criticizing President Obama. The headline: NBC News Hires Anchor Who Pledged to Not Criticize Obama About Anything.

First of all, That is not exactly what Sharpton said. The reference is to a 60 Minutes interview (via Cenk Uygur) where Sharpton said that criticizing Obama with regard to a black agenda would diminish his role as President. What he said was…

“What I don’t want to see is because he is black we act like he’s not the real president – he ought to be leading the black cause or the labor cause. He’s the President. To minimize who he is, I think, is an insult to the achievement of having him there.”

So this was not about never criticizing Obama, just not obsessing over a single issue. For the record, I’m no fan of Sharpton, but I do think that accuracy and honesty are important. And in that regard Fox should acknowledge that their whole business model rests on not criticizing Republicans and conservatives. In a specific example you have Dick Morris, who has been on the Fox payroll for years, and recently pledged never to criticize GOP front-runner Mitt Romney:

It’s safe to say that he has the same policy toward any other prospective Obama opponent. And the same goes for his Fox colleagues. Remember that when you hear any of them talking about any of the GOP candidates. 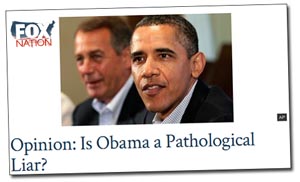 And just for fun, take a look at the featured story on Fox Nation this morning: Opinion: Is Obama a Pathological Liar?

Hmmm. That’s something to ponder. Along with: Is John Boehner a Child Molester? Is Michele Bachmann in League with Al Qaeda? Is Rupert Murdoch a Reptilian Alien? Does the Republican Party and Fox News shill for billionaires and anti-American multinational corporations to advance their own personal interests and greed? (Oh, wait a minute. That last one has already been verified).

One thought on “Fox Nation vs. Reality: On Al Sharpton”