Fox News has been engaging in a relentless campaign against Media Matters for more than a month. They began in June with allegations that Media Matters had violated their tax-exempt status by factually covering Fox News broadcasts as well as other right-wing media. The Fox campaign included frequent solicitations on the air (more than 30 times) by Fox anchors beseeching their viewers to file complaints with the IRS challenging Media Matters’ non-profit status. Amongst those participating in the onslaught were Bill O’Reilly, Bret Baier, Steve Doocy, Charles Krauthammer, James Rosen, Ann Coulter, Dick Morris, and Bernie Goldberg.

The latest salvos come from two fronts: 1) An official filing of an IRS complaint against Media Matters by a Fox crony (more on that later), and 2) from the Fox Business Network which has just completed a three-part series on the subject.

The arguments presented by Fox Business were pitifully weak and often contradictory. For instance, the article stated that some of Media Matters’ activities were “not found in the scope of nonprofit tax law.” That’s a contorted argument because the tax law was never meant to include every imaginable activity that might occur. There is nothing in the law that says that an exempt organization can provide Italian food during meetings, but that doesn’t mean they are in violation of the law if they send out for pizza.

The article also quoted Marcus Owens, a former IRS official, as saying that his remarks in defense of Media Matters were misconstrued. The only problem with that is that the article itself quoted Owens explicitly defending Media Matters saying that their activities are “generally protected by the first amendment,” and that they are “not going to jeopardize its tax-exempt status.” So the article is disparaging its own source. It further points out that…

“Media Matters says in its tax returns that it has not engaged in political campaign activities or lobbying. But Media Matters has run items that advocate for legislation, which would violate the tax law if it became a substantial part of the nonprofit’s activities.”

And what does the article regard as “substantial?” A single 2004 posting on the Media Matters web site in support of the Fairness Doctrine. That’s it. Compare that to the Media Research Center’s NewsBusters, a conservative mirror image of Media Matters. NewsBusters conducts persistent campaigns including one in opposition to the Fairness Doctrine. They also have campaigns against immigration, George Soros, and in support of the Tea Party. These are not years-old, isolated efforts. They are current and ongoing. Yet Gray has not filed a challenge to the tax-exempt status of the Media Research Center. Or the Heritage Foundation. Or the U.S. Chamber of Commerce. Or the Tea party’s own Americans for Prosperity and FreedomWorks.

The remainder of the series consists of an abundance of nonsense. It suggests that having tax-exempt status is equivalent to having a government endorsement. It cites an IRS ruling that “a nonprofit will lose its tax-exempt status if, among other things, a significant portion of its communications consist of viewpoints or positions ‘unsupported by facts.'” Of course, Media Matters is notoriously stringent about providing factual support for everything they post.

In addition to Fox News and Fox Business, the Murdoch propaganda family continued piling on Media Matters with articles on Fox Nation that still retain the first position in their “New Stories” section, despite being more than a month old. The Fox Nationalists posted links to a pre-filled-in form that could be printed out and mailed to the IRS. News Corpse has requested information from the IRS on the volume of complaints, if any, they have been receiving in the past month. That request is still pending. However, it may be safe to surmise that the response of the Fox audience was not particularly impressive, because they had to resort to filing their own complaint indirectly via former George H.W. Bush counsel, C. Boyden Gray. 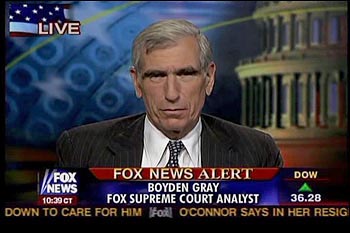 In filing this complaint, Both Fox and Gray asserted that they are unaffiliated with one another. Gray insisted that he is not representing Fox and is not on the payroll. What they neglected to disclose is that Gray was previously identified as a both a Fox News Supreme Court Analyst and a Fox News contributor. This puts in doubt their claims to being unaffiliated, and it destroys any pretense of transparency.

Gray’s obviously biased perspective is well represented in the letter he sent to the IRS. The core of his complaint is the allegation that Media Matters has “declared war” on a television news channel [Fox News]. Of course the truth is that Fox News had long before declared war on Media Matters. Consequently, Media Matters may just be regarded as defending itself from a powerful, international, media megalith.

Gray’s complaint began with a claim that “Media Matters’s efforts to harm Fox News are intended to weaken the Republican Party.” Gray offers no support whatsoever for that claim. The truth is that Media Matters is merely attempting to demonstrate the bias on the part of Fox News for the GOP. And despite Gray’s charge, every example he cites of Media Matters allegedly attacking Republicans actually show that they are reporting on what others in the media are saying about the party.

Gray also makes a rather incoherent argument that the IRS is somehow violating the free speech rights of Fox News by granting Media Matters tax exempt status. The tortured case he makes seems to be that such status somehow punishes Fox News. Suffice to say that he never explains how, or establishes that Fox News’ rights have been violated in any way.

But the height of Gray’s Inanity is his contention that Media Matters has embarked on an “unsupportable attempt to tie Fox News to the Republican Party.” However, tying Fox News to the Republican Party is about as difficult as tying your shoelaces. The support is overwhelming and includes surveys that show the extreme imbalance of Republicans to Democrats on Fox News. It includes the rampant utilization of talking points directly from GOP sources on one program after another throughout the broadcast day. It includes memos from executive editors directing their anchors and reporters to frame stories favorably to right. It includes the overt hostility and racism that Fox Nation publishes repeatedly.

Setting all of that aside for the moment, it would interesting to hear how Gray would reconcile his assertion that Media Matters is trying to “weaken the Republican Party,” with his assertion that any attempt to tie the party to Fox News is “unsupportable.” If the party and Fox News are unconnected, then how could one be harmed by attacking the other? Gray’s arguments are an endless loop of contradiction. They can’t both be true.

Given a full examination, Gray’s complaint to the IRS is amateurish blather. He fails to prove a single point in his letter. But he does manage to prove that Fox News, and the Murdoch-led News Corp, is a deceitful and unethical enterprise for endeavoring to partner with Gray on this puerile exercise. they are exhibiting their proclivity for bullying their perceived enemies and using their media perch to smear those with whom they disagree. They are a criminal enterprise and should be treated as such. Hopefully the investigations just getting underway will put these gangsters where they belong.

6 thoughts on “Fox News Escalates Its War On Media Matters”