Once again, Fox Nation outright lies in a headline article. The arrogance of the Fox Nationalists is astonishing in that they will brazenly lie even while providing a link to the source data the exposes them as liars. 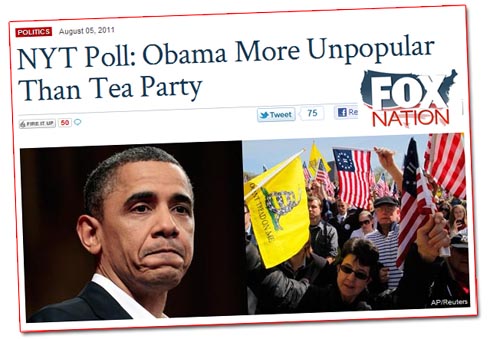 Here we have Fox Nation headlining that President Obama is more unpopular than the phantom Tea Party. The source is a poll by the New York Times. But if you look at the actual poll results you will find that the truth is exactly the opposite of what the Fox Nationalists are saying. From the Times:

“The public’s opinion of the Tea Party movement has soured in the wake of the debt-ceiling debate. The Tea Party is now viewed unfavorably by 40 percent of the public and favorably by just 20 percent, according to the poll.”

“The president’s overall job approval rating remained relatively stable, with 48 percent approving of the way he handles his job as president and 47 percent disapproving.”

The only way to spin this poll positively for the the Tea Party is to deliberately misconstrue the data by taking into account only the unfavorable numbers as if they existed in a vacuum. The liars at Fox fail to acknowledge that nearly 40% of respondents were undecided or hadn’t heard enough about the Tea Party to have an opinion (more evidence that it is a phantom party). Of the respondents who do have an opinion, they dislike the Tea Party by 2-to-1. If that ratio held as people became more aware of the Tea Party, their unfavorables would shoot up to 66%.

Leave it to Fox to lie to their audience and produce a community characterized by ignorance and wishful thinking. It is this sort of disinformation that creates delusional political factions like the Tea Party in the first place.

[Update 8/17/2011] New polling shows that the Tea Party is even less popular that atheists and Muslims.

6 thoughts on “Fox Nation vs. Reality: Obama And The Tea Party”