Brian Williams has been working for NBC for 28 years. For the past five years he has hosted The 11th Hour on MSNBC. A few weeks ago, however, he announced that he would be leaving the network, and Thursday was his last day. 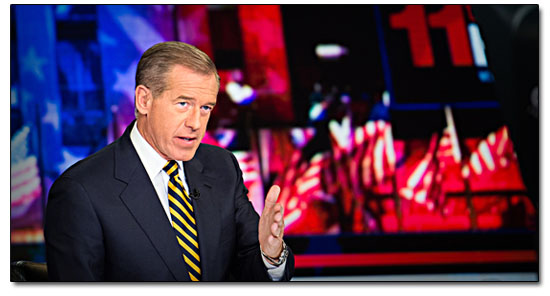 Williams distinguished himself as a compelling communicator with a sly sense of humor and talent for biting snark. But in his closing statements before riding off into the sunset, Williams had more serious matters in mind. And his farewell words speak for millions of Americans concerned about the future of this country:

“My biggest worry is for my country. The truth is I’m not a liberal or a conservative. I’m an institutionalist. I believe in this place. And in my love of country I yield to no one. But the darkness on the edge of town has spread to the main roads and highways and neighborhoods. It’s now at the local bar and the bowling alley, at the school board and the grocery store. And it must be acknowledged and answered for. Grown men and women who swore an oath to our Constitution, elected by their constituents, possessing the kinds of college degrees I can only dream of, have decided to join the mob and become something they are not, while we somehow forget who they were. They’ve decided to burn it all down with us inside. That should scare you no end, as much as it scares an aging volunteer fireman.”

Signing off MSNBC for the final time, Brian Williams says "my biggest worry is for my country" while bemoaning "the darkness" that has engulfed the nation.

"I’m not a liberal or a conservative. I’m an institutionalist. I believe in this place." pic.twitter.com/fnx1pclUKs

Brian Williams deserves our thanks and best wishes for whatever future endeavors he pursues. And in the meantime we must all heed his warning about the “mob” that is threatening to undermine our democracy. Williams has left us with a challenge to defend the American experiment. Hopefully we are up to the task.

3 thoughts on “Brian Williams’ Passionate and Moving MSNBC Sign Off: ‘My Biggest Worry is for My Country’”