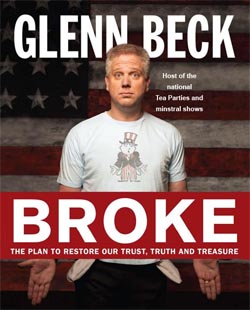 Things must be getting pretty bad over at Glenn Beck’s place since he lost his Fox News pulpit. On his radio program today, Beck had to resort to begging his listeners to stave off his demise. It adds a whole new meaning to the title of his recent book: Broke. Beck begins his appeal by declaring that he opposes common free market methods of financing business:

If he is creating so much wealth, then why is he forced to pass the plate to his radio disciples in order to stay afloat? And is he so inept that he can’t form a business relationship that preserves creative control of his programming? And if outside money is so repugnant to him, why does accept it in the form of advertising on GlennBeck.com and TheBlaze (although there are very few ads on either one)? Has he abandoned his control and principles on those sites by taking outside money. Apparently things are pretty dire, indeed.

Beck: But I will tell you that I believe we are running out of time. The truth has to be told. My model is to go directly to you and ask you for GBTV – if you would sign up for GBTV.com. I’m not asking you for charity. This isn’t PBS. I’m not gonna take it from you. If we have provided $5.00 of information to you a month, Would you please consider supporting us.

Beck’s remarks about not being PBS because his venture is not charity and he isn’t “gonna take it from you,” stretch the bounds of reason. First of all, PBS doesn’t take anything from anyone. It IS a charity and you are free to donate or not. And if you decline to donate you can still watch. GBTV, on the other hand, demands payment from you and prohibits viewing if you fail to comply.

One thing Beck gets right is that his GBTV is certainly not PBS. I have yet to see rodeo clowns telling fart jokes and deliberately lying to viewers on PBS. The PBS NewsHour has never speculated on an Arab Islamic/American Leftist coalition to bring about a global Caliphate. Frontline does not broadcast documentaries comparing the President to Hitler. And Masterpiece Theater hasn’t booked Ted Nugent as an economics analyst.

I don’t know if Beck is running out of time or not. Either he’s telling the truth and his business is floundering, or he’s lying and this is just a scam to fleece his followers. Either way he’s a slime ball. Some things never change.

[Flashback] Whining about protesters who were organizing a successful campaign to persuade advertisers to withhold their ads from Beck’s Fox News program, Beck boasted that no matter what happened he would rise like a phoenix – or the Messiah – or whatever:

“They can take my job and they can take my wealth but that’s okay – even if the powers to be, right now, succeed in making me poor, drum me out, and I’m just a worthless loser – which I’m just about that much above that now – I will only be stronger for it. I will use American ingenuity and my ingenuity to pull myself up, and I will find another way to get my message out on a platform that will be a thousand times more powerful!”

A thousand times? But you still have to beg for money and cry that time is running out?