Fox Nation, the Internet community of Fox News, has completed its transition into a nearly 100% Obama Bashing Internet destination. Visit the site at any random time and you are likely to see something like this: 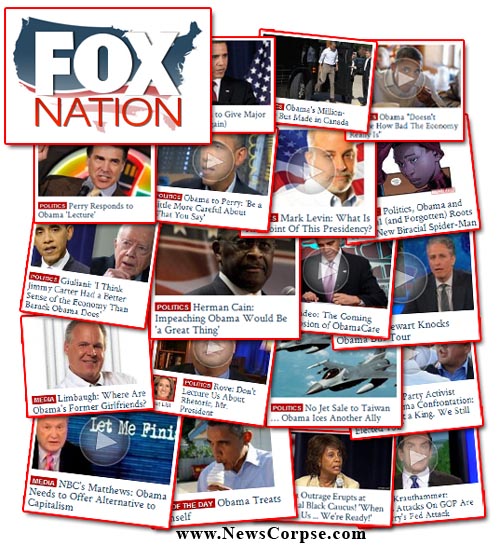 That’s 19 separate articles, all from just this morning, disparaging the President. They consume nearly all of the space on the site’s home page. Despite the fact that the Fox Nationalists assert that they aspire to fairness and balance, it is clear that they are engaged in non-stop propaganda to effect the political outcome they desire. It makes a mockery of their claim that…

“The Fox Nation is committed to the core principles of tolerance, open debate, civil discourse, and fair and balanced coverage of the news.”

How brain damaged does one need to be to believe that BS? And if your stomach is strong enough to venture into the community comments, you will be repulsed by a collection of racists and advocates of violence and even assassination.

Obviously the folks at Fox are escalating their campaign of hate. With the election season heating up they are redoubling their efforts to malign the President and every other Democrat. Perhaps their desperation is due to the pathetic field of candidates they are saddled with promoting. They are in the embarrassing position of having to support Tea Bagger Bachmann, Perp Walk Perry, and Corporate Mate Mitt.

What’s more, the conservative/Tea Party wing of the GOP is suffering a dizzying decline in popularity.

“[T]he Tea Party ranks lower than any of the 23 other groups we asked about — lower than both Republicans and Democrats. It is even less popular than much maligned groups like ‘atheists’ and ‘Muslims.'”

No wonder Fox Nation is ramping up their war effort. They have a steep hill to climb and they are convinced that their only prayer for victory is to smear the enemy and to do so harshly and repeatedly. Steady your nerves – there is going to be much more of this to come. It will include accusations of socialism and treason, as well as naked fear mongering. It will probably backlash against them completely, but it will still be an ugly spectacle.